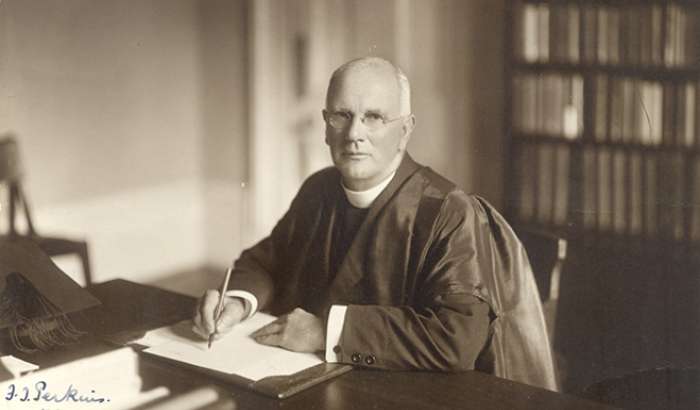 Frederick Thomas Perkins was born in Westbury in Wiltshire, England, in 1877. He lived there for the first part of his life, where his father ran a school. His family then emigrated to Queensland, where Perkins attended Townsville Grammar School. Later, he would go to the University of Sydney, where he would take honours in classics, completing a Bachelor of Arts in 1899, and a Master of Arts in 1901. Perkins entered the ministry in 1903, being ordained a priest in 1904.

Perkins loved being a schoolmaster, and he was a headmaster at two schools before Cranbrook: first Monaro Grammar School at Cooma in 1908 and then The Armidale School in 1913. He left Armidale to come to Cranbrook in 1918, at 41 years of age. He was chosen partly for his demonstrated ability to increase enrolments at his previous two schools.

Known as “Polly” Perkins, he immediately made an impression on the boys. The Old Boys from those first days and years remember Perkins as “small” and “intelligent”, a man who “set a very high standard of personal and spiritual behaviour".1 One Old Boy remembers that Perkins was “very strong” and “very keen that a Cranbrook boy would be a gentleman".2

Another Old Boy, Richard Foster, remembers that Perkins was a “disciplinarian, but he was a very understanding and a gentle man". Foster remembers one time when he had been sent to the Headmaster to be caned for talking in class: “He asked me why I had not said to the lad next to me: 'I can’t talk now.' Why didn’t you say that? And I said: 'Sir, that would have been talking anyway.' And he put his cane away."3

Perkins first retired from Cranbrook in 1932, having seen it grow, both in size and reputation. But he had become depleted from 12 years of service and under the new conditions caused by the Depression, which threatened to harm the school’s success and longevity.4 Having built Cranbrook up from its beginnings, Perkins retired. He then focused on his duties in the Anglican Church, including conducting the wedding services of Old Boys.5

Then, in a moment of crisis, when his successor left Cranbrook quickly in 1939, Perkins stepped into the breach as Acting Headmaster. After the crisis had passed, and Brian Hone had taken over as the new Headmaster in 1940, Perkins stayed on as the school’s Chaplain and as mentor to the new Headmaster. He finally left in 1947 at 70 years of age, having become a much-beloved institution at the school and devoting himself unwaveringly to the benefit of Cranbrook and its students in various capacities for an impressive 22 years.

On the measure of the contribution of “Polly” Perkins, the last word is given to a student when he retired in 1932. It was Speech Day, and all the members of the school were assembled in the dining room: “Every seat was occupied and the large overflow stood around the room, in the adjacent hall and on the verandah.” The Headmaster’s speech had taken “the usual form”, but on its conclusion, Perkins, “very unemotional”, stated that it would be his last speech as Headmaster:

He sat down. The was a short silence and the hand clapping started gently at first then grew in volume. After several minutes the Chairman, the then Chief Judge in Equity, Sir John Harvey, raised his hand for silence so the meeting could proceed. The volume of the clapping redoubled and all over the hall people started rising to their feet until in no time, all were standing and the clapping continued for another five minutes. Again, the Chairman raised his hand for silence. At this signal cheers broke out from all sides and were added to the thunderous applause. Polly’s eyes glistened and a tear escaped his over-filled lids.6