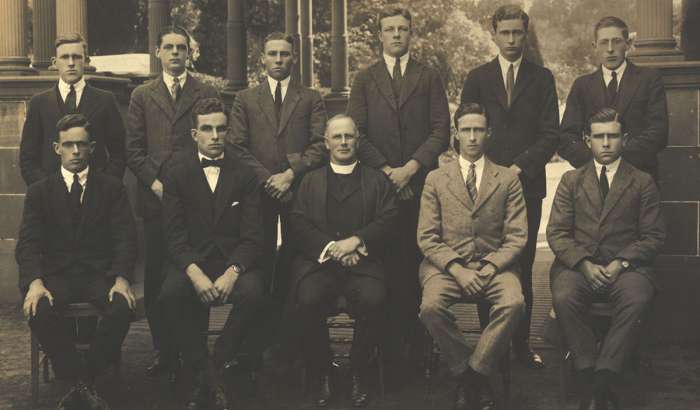 Aeneas John Lindsay McDonnell (1904–1964) was born in Queensland and was educated at Cranbrook between 1920 and 1922; while at school, he developed a passion for art. He gained first class honours in French for his Leaving Certificate examination, placing seventh in NSW. In his last year at school, McDonnell was awarded the Aubrey Halloran Prize for Classics (French) and this prize continues to be awarded today.

Following his time at Cranbrook, he became an art dealer, archivist, art connoisseur and collector and travelled widely. He had a lifelong interest in French art and collectables, and in 1928 he became a partner in the Macquarie Galleries in Sydney.

During the 1930s, McDonnell became Private Secretary to the Governor of Queensland but with the outbreak of WWII, he joined the Red Cross in 1940 and served in Africa and the Middle East until late 1945. In 1944, he enlisted in the AIF and was immediately seconded to the British Forces for special duty. As a result of his knowledge in art and his expertise in French, he was assigned to the Civil Affairs Division of the Allied Armies, and was the Australian representative to the Supreme Headquarters Allied Expeditionary Force Mission, in 1945. U.S. General Dwight D. Eisenhower commanded this organisation throughout the war.

As a monuments officer, McDonnell travelled widely throughout the American and British zones, identifying priceless artworks that had been stolen by the Nazi regime. He was discharged from active service in 1947 and for his service he was appointed as Officer of the Légion d'Honneur (by the French government) and awarded the Australian Service Medal as well as the British War Medal with Mentioned in Despatches (oakleaf). McDonnell was also awarded the France and Germany Star.

When he returned to Australia, he was appointed advisor to the Felton Bequest at the National Gallery of Victoria in Melbourne, and was instrumental in purchasing valuable works for the gallery. He died in 1964.

Donnelly, M., "Australians were among the monuments men who helped recover art treasures stolen by Nazis", The Daily Telegraph, June 23, 2018, accessed at: http://www.dailytelegraph.com.au/