The Death of Harry Crago 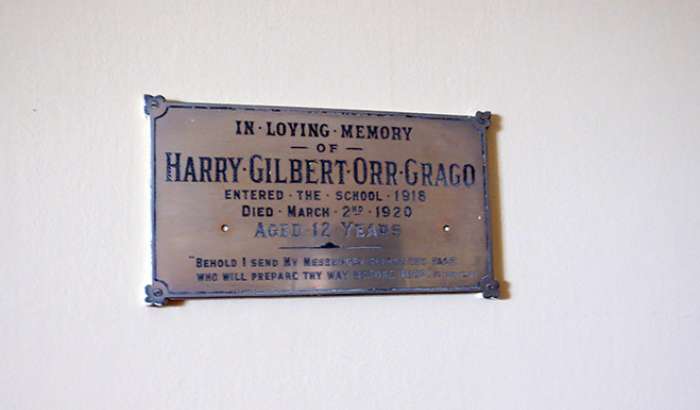 A painting depicting the elegant curved trunks and spindly white branches of an Australian eucalyptus sits in our school archive. This watercolour, by the relatively unknown artist W. Herbert Carter, holds a special place in Cranbrook’s early history. The peaceful Australian landscape was hung in our Assembly Room in memory of Harry Orr Crago.1 More visible to Cranbrookians for the last 98 years is the plaque that sat in the old Chapel and now the new Chapel, the first plaque of its kind in the school. It reads:

“BEHOLD I SEND MY MESSENGER BEFORE THY FACE

WHO WILL PREPARE THY WAY BEFORE THEE” St Luke VII, 27

Harry and his older brother Frank belonged to the group of 64 boys who attended Cranbrook’s first school day in 1918. Twelve year old Harry’s death from diabetes less than two years after he commenced his schooling shook our developing community.2 Our first Headmaster’s handling of this sad moment and Cranbrook’s support of Harry’s family remind us to hold our central values of reflection and spiritual awareness, compassion and companionship close.

Harry's and Frank's time at Cranbrook was successful, with Frank taking out third place in the 220 yards under 15s handicap in our first Athletics Carnival on 26 September 1918.3 Sadly, little more than a year after the carnival, in the Christmas holidays of 1919, Harry’s diabetes caused a sharp decline in his health.4 He returned to school the following term, but was taken seriously ill while visiting his mother in late February and passed away on Tuesday 2 March 1920.5

By a cruel irony, it was in October of the same year that Dr Frederick Banting, of the University of Toronto, initiated a new experimental approach towards the treatment of diabetes that would lead to the discovery of insulin in 1922.6 Prior to this, patients like Harry were only able to manage their condition by reducing their starch and sugar intake by following harsh diets.7

Happily for other diabetic children, Australia became one of the earliest countries to treat patients with insulin when Professor Thornburn Brailsford Robertson secured a licence to extend Banting’s work at the University of Adelaide in 1923.8 Robertson successfully supplied rabbit insulin to treat a six-year-old boy in January of that year and produced further insulin from a beef pancreata that still exists today.9 Thanks to these advances, Type 1 diabetics can now live into their nineties, a significant increase from the early 20th century when diabetic children rarely survived to adulthood.10

On Thursday 4 August 1920, Cranbrook held a special commemoration service for Harry. The Headmaster explained that the eucalyptus painting to be hung in the Assembly Room would serve a twofold purpose by not only memorialising Harry, but also adding to a shared history that would strengthen Cranbrook’s strong communal bond “when our school days are over and we are separated by great distances”.11

Quoting from St. Paul, Chapter 15 of 1 Corinthians, he comforted the boys by observing that although Harry was “no longer sharing our experiences”, he still formed part of “the great principle of life”, that is “the beauty of the harvest, and the wonders of the natural body, and the glory of the sun and moon and stars”.12

Today, as the pace of life becomes increasingly rapid, stories from the Cranbrook Chapel, like Harry’s, remind us to look beyond the immediate and take the time for reflection and spiritual awareness – one of Cranbrook’s core values.