The Very First Day of School 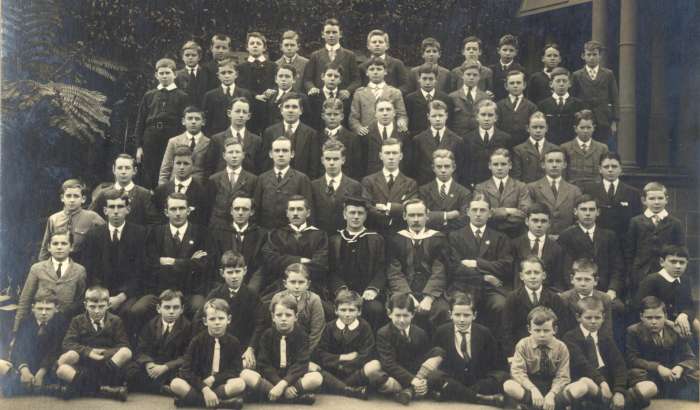 Cranbrook’s very first day was 23 July 1918, one day after it had officially opened. The original cohort of students ranged from about 8 years to 15 years and was split between 38 day boys and 26 boarders, with the latter group having travelled from around New South Wales.1 Bill Clark, one of the first boarders, came from Newcastle, while he remembers “two or three groups that had come from Cootamundra”.2 Boarders had housemaids who made the beds and unpacked or packed their cases, but in the early days there was no hot water provided, so showers were “mighty cold”.3

The Headmaster, Reverend F T “Polly” Perkins, assembled the new students in the dining hall on that first day. He began by welcoming the boys, impressing upon them the need to live up to the school’s motto, which was Esse Quam Videri — “To be rather than to seem to be”.4 He ended by reminding them that the school as yet had no traditions and it was their “privilege and responsibility” to “lay the foundations of those traditions”.5

“Polly” Perkins was Headmaster of Cranbrook from 1918 to 1932. He was remembered as a stickler for discipline, who focused on developing the character of his students.6 This was in keeping with the philosophy of education in the early twentieth century, which held that “life was made and that character was formed for good or bad [at school]”.7 Students remember that in those early days, the Masters were “in amongst us. They wanted to ensure that Cranbrook started off in the right way, and we were making traditions for Cranbrook.”8They also remember that Perkins was “very strong” and “very keen that a Cranbrook boy would be a gentleman”.9

After the Headmaster’s speech, most of that first morning was “spent classifying the boys into four classes and establishing daily routines”.10 The “favoured method of instruction” in Australia by 1900 was “the organisation of children into classes, each group taught by a single teacher in a classroom, working through a staged system of teaching and learning organised around the calendar year”.11 The curriculum would have been organised around “the traditional grammar school subjects of English, mathematics and ancient and modern languages”.12

The conditions of the early days of Cranbrook were cramped, with a dining room, library, and museum downstairs, and accommodation for staff and students upstairs. Classes were taught in the dining room, in the rooms opening onto the stone verandah, or at times on the verandah of the dining room.13 Additionally, “for the first two terms in 1918, the Headmaster and his family occupied rooms over the Chapel, Masters’ Common Room and the Head’s Study”.14 This meant that teaching and living very much took place “cheek by jowl”.15

On those early classroom conditions in July, one Old Boy evocatively remembers “doing Latin on that old dining room verandah in the depths of winter, shivering in our overcoats, cold, cramped fingers trying to cope with pen or pencil; and I can hear Polly’s shrill voice above the cold, frigid, flapping of the canvas blinds: “No, No, Carroll, ille, illa, illud.”16