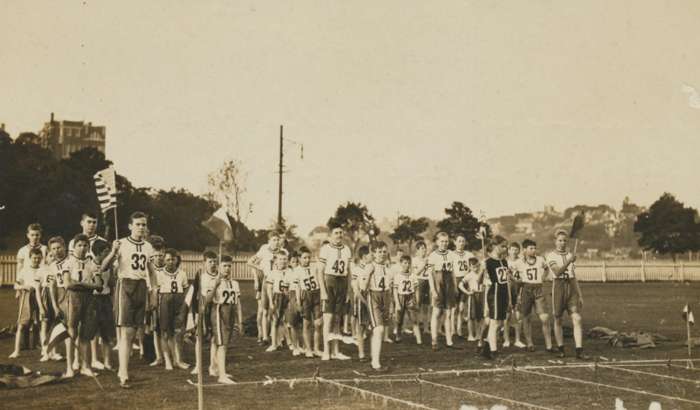 The values of action and team work, global responsibility and service to others have been central to Cranbrook’s character since our first athletics carnival was held on 26 September 1918, three months after the School’s establishment, and just two months before the end of WWI.1

On this sunny Thursday afternoon, Cranbrook’s new school community gathered at Rushcutters Bay Oval to support not only their boys’ sporting ambitions, but also the Allied Forces in France. On the day of the Carnival, the Allies began the Meuse-Argonne offensive – a pivotal part of the great triple offensive that broke the German lines on the Western Front and led to the conclusion of the war on 11 November that year.2 Poignantly, many of the Cranbrook boys who learnt valuable lessons about resilience, challenge, courage, failure and success on the sporting field that day went on to hold up those values on the battlefield themselves when WWII broke out in 1939.

Cranbrook’s first Athletics Carnival consisted of 30 events, including running competitions and three-legged handicap, sack, and egg-and-spoon races.3 The highlight of the afternoon was a race in which each team bore an Allied flag.4 While the Union Jack, as well as American and Australian flags, flew to the tunes of the NSW military band, around the other side of the world the Meuse-Argonne offensive began.

On that wet morning at 5.30am a dozen guns turned loose at once with a detonation that would have shaken one in the pit of the stomach and thousands of shells created a false daylight in the hills, forests and fields of the Western Front.5 Lasting 47 days, this would be one of the largest and bloodiest operations of the war, with the Allies expending more ammunition in its first four hours than both sides fired in the American Civil War.6

While the Meuse-Argonne offensive brought WWI to an end only two months after Cranbrook’s carnival, many of the boys who competed that day would go on to fight in WWII. Jack Weekes, who came second in the 100 yards under 11s handicap, was a flying officer in the Royal Australian Air Force and was awarded the Distinguished Flying Cross for his services.7

Errol Maffey, who came third in the 220 yards under 13s handicap, was taken prisoner in Borneo while serving as a major in the Australian Army Medical Corps.8 His wife Betty spent three years knowing nothing of Errol’s whereabouts before receiving a letter from him in 1945 advising that he was malnourished, but recovering.9 He returned home later that year.

Many other Cranbrookians who carefully balanced eggs on spoons, or lurched towards the finish line in sacks in September 1918, served as privates, sub-lieutenants, lieutenants and captains in the army, air force and cavalry during WWII.10 Since the flying of the Allied flags at our first Athletics Carnival, Cranbrook has continued to embrace the belief that "no man is an island and no school should be a cocoon". We continue to encourage our boys to be globally responsible to honour the sacrifices of these men who provided the ultimate service to others.