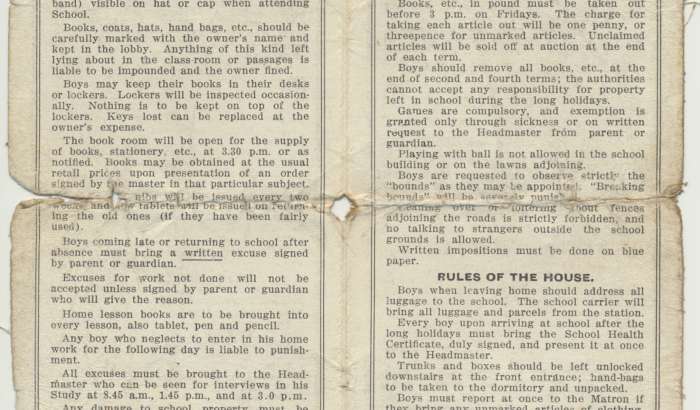 On their first day of school, Cranbrook's early students were presented with a copy of the school rules. Printed on a folded sheet of octavo cardboard, these rules were to be kept on hand by all boys at all times. In these early days, the school took a clear autocratic approach towards discipline and put a premium on timeliness, neatness and silence.

Days were clearly divided, with morning preparation from 7–7.40am, class from 9.15–3pm, tea at 6pm and evening preparation from 7–8.30pm, followed by “lights out” and “silence” from 9pm.1 It was expected that boys would be “properly turned out” and display courtesy in public by standing up for people in trams and, in one Old Boy’s words: “not to be… appearing to be some of the rich”.2 Looking back in 2016, Frank Tebbutt shuddered to recall the “many hundreds of times I wrote out rule 16”, which he remembered word for word for the rest of his life: “No running, noise or rough play may be had in the classroom or corridors, but organized games may be played on the oval".3

During the first fifty years of Cranbrook’s history, it is clear that most students were unquestioningly secure in the knowledge that “They were the rules, and the rules were kept".4 This changed in the 1970s, when the boys began to chafe at the school’s rigid discipline. The “Comment and Discussion” section of The Cranbrookian of June 1972 was filled with student calls to “abolish the school hat”, “house periods” and “exeat weekend sport".5

A piece by former student W. D. Brown titled “Individual v. Institution” reflected the socially progressive values, increased political awareness and economic liberality of the period.6 Brown decried a “system” with “no capacity for freedom”, based on “conformity, uniformity and competition".7 He questioned the benefits of forcing “a student to dress... in the same clothes... as everybody else” and making them “play competitive and violence-based games".8

This 1970s resistance draws attention to the importance for school rules to teach young people about morality and have the capacity to grow as the values and norms of society change.9 Studies have shown that students are more inclined to support rules if they are invested in the school through good relationships with their teachers, a desire for good grades, and a sense of fairness and belonging.10

Recognising this, the school's current rules, including the Code of Responsibilities and Standards of Behavior for Students, Complaints and Dispute Resolution Guide, and Homework and Bullying Policies, have been developed to create a values system based on a balance of responsibility and independence that the students will use for the rest of their lives.11 To encourage the senior boys to actively engage in constructing their own understandings of discipline, the school also holds a fortnightly Ethics Programme.12 This more recent emphasis on interaction and ethical reasoning places Cranbrook's students in the best position to contribute to a strong, healthy community at school and beyond.