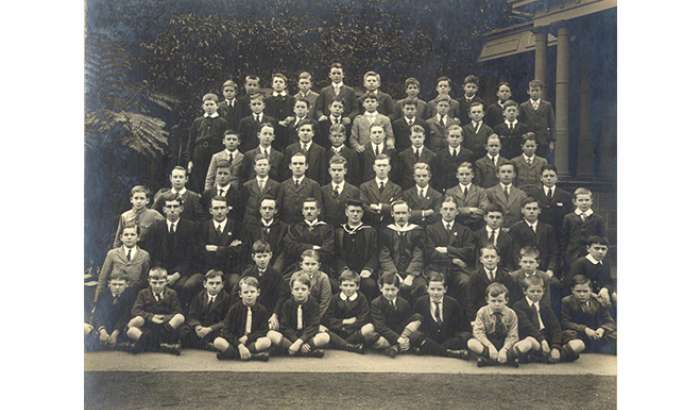 When Cranbrook first opened its doors on Tuesday 23 July 1918, there was no official school uniform.1 Over the following years, it became expected that older boys would don a blue serge suit, while those aged nine to twelve would wear shorts with long woollen socks.2 In the 1930s, Headmaster Iven Mackay introduced the “Cranbrook grey” suit, but this was only loosely taken up, with one Old Boy recalling that:

The school uniform ranged from shorts to open-necked shirt, to trousers to knickerbockers. Some had suits, some had rather shapeless felt hats with a band around it with the school badge on it. Some had little caps.3

According to this former student, his classmates were “really an awful rag-bag and bob-tail lot”.4 The one occasion when our earliest students were required to dress in uniform was on their Sunday march to St. Mark’s Church, Darling Point. Looking back, many of our Old Boys remembered this “Church Parade” as an uncomfortable affair due to the stiff collars that they were expected to wear.5

Prior to the 1920s, just as the corset gave women a definable bearing, stiff dress shirts and collars gave men an air of dignified uprightness.6 However, soldiers entering WWI had been issued soft shirts with attached collars and they wanted to adopt this more comfortable look following their return home.7 The stiff detachable collar was a compromise for men after the war, who could retain a dignified appearance without the necessity of laundering a whole shirt.

Nonetheless, by the 1930s, many men, including our students, increasingly chafed at the constraints of rigid detachable collars, favoring soft attached ones.8 Across the sea, the Anti-Collar League formed in Paris in 1926 with the aim of abolishing the collars completely, while the Men’s Dress Reform Party in Britain in 1929 sought to replace it with a soft one.9

Fearing a similar insurgence, prior to setting out to St. Mark’s Church our boys were required to line up before the head prefect who would “flick each collar that looked suspicious”.10 One former Cranbrookian, James Todhunter, recalled dousing his with talcum powder, “so it didn’t rub on your neck”.11 Another Old Boy, Errol Bode, was always one step ahead as he “stuffed the soft one in the inside pocket” of his school blazer to put on later.12

There were several other attempts to make our boys dress more cohesively over the years, but it was not until 1985 that Headmaster Carter attacked the question of a school uniform with determination.13 Tired of students reinterpreting our motto, Esse Quam Videri ('to be rather than to seem to be'), as “it didn’t matter what you looked like as long as you were being yourself”, Carter set up a Uniform Committee led by the then Master of the Junior School, John Moir.14

Under this initiative, the grey suit was replaced by a smart dark blue blazer with the school crest on the left-hand side of the upper pocket and matching grey school trousers and shorts, a uniform that our students still wear proudly today.15 (Read more about the development of the Cranbrook blazer here.)