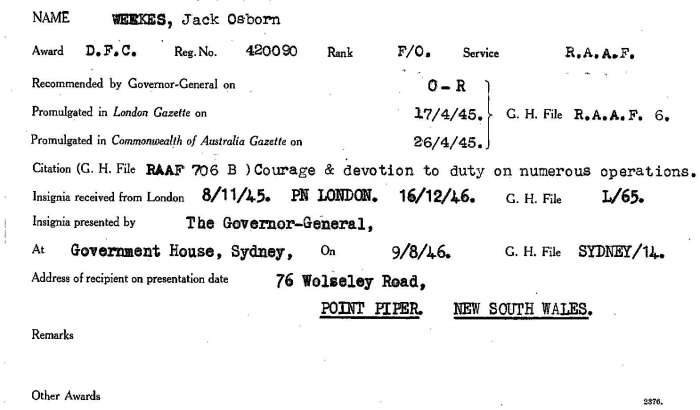 In 1928, the Cranbrook eights rowing team took out third place in an interschool competition. Beneath the synchronised strokes of his team, Frank Weekes fought through agony for Cranbrook, having developed a “boil on his posterior” just prior to the race.1

Fellow rower Errol Bode recalls the team cutting up “a big sponge” which they “sandwiched between [Frank’s] rowing trunks”.2 Unfortunately, this only provided momentary relief, because it slipped halfway down the course and he “rowed the rest of the way rubbing a boil on to the seat of the boat”.3

The School magazine of 1942 described Frank as “rather an unusual person, brilliantly clever, but without any interest in examinations”.4 This was because Frank and his younger brother Jack had far more exciting activities to pursue; they were not only rowers, but motor enthusiasts, both on the ground (as hot rodders) and in the air (as members of the Royal Australian Air Force).5

On the WWII battlefield, the two brothers held up the Cranbrook values of action and teamwork and service to others that they had formerly demonstrated as school rowers, but tragically only one managed to return home.

Frank and Jack were the sons of one of Cranbrook’s founders, John Weekes, a hardware merchant and leather manufacturer.6 In deference to the family wishes, Frank took up an economics degree following his schooling, but both boys knew that their real passion lay in car racing.7

In 1934 the brothers set up Car Service Ltd and bought two near-new Ford V8s.8 They carefully fitted one of the Fords with Columbia two-speed rear axles, a Miller camshaft, and a Scintilla Vertex magneto, amongst other features.9 These modifications would not surprise a 1950s hot rodder, but were forward-thinking for the 1930s and made the Frank and Jack’s fondly named Grey Ford very competitive on the race track. The brothers entered several contests, including the Waterfall Hill climbing race of 1935, where they placed second with a best time of 45½ seconds.10

Sadly, Grey Ford was put on the blocks in 1940–41 when Frank and Jack enlisted in the RAAF.11 Jack was awarded a Distinguished Flying Cross in 1945 for his courage and devotion to duty on numerous operations, but returned to Australia without his brother and racing partner.12

On 28 July 1942, the operational flying instructor set out in a de Havilland DH. 98 Mosquito FB Mk IV as part of the 105 Squadron detailed to bomb the Krupps works in Essen, Germany.13 He failed to return from that mission, leaving behind not only Jack, but also his new wife, Miranda Robinson.14

At a loose end following his brother’s death, Jack did not take the Grey Ford off the blocks again until he set out on the long drive across the Nullarbor to Perth, where he settled in 1947.15 Today Jack’s son John is working to restore the beloved V8 as a significant part of the history of two Cranbrook brothers who sacrificed so much for their country.