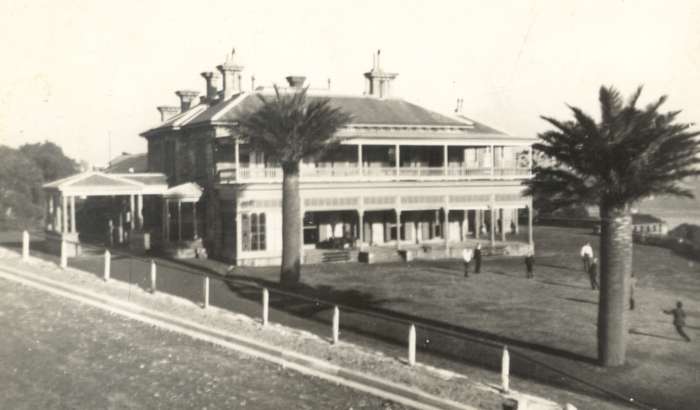 ​Dr Reginald Errol Maffey, known as Errol, was one of Cranbrook's original students, commencing in 1918 in his first year of secondary school and continuing until 1923. In 1951, he was asked to speak at the Junior School Prize Giving, at which he described his experiences of the early days of the school's history. This speech was published in The Cranbrookian in the May 1952 issue, pp. 37-38 and is reproduced in full below.

“Mr Rowland has mentioned that 1952 is the Silver Jubilee of Harvey House, so I shall try to tell you something of the early days of Cranbrook School and a little of the first two Junior Houses.

First let me remind you that you boys, when you came to Harvey House, had to find your place and fit into a scheme of things which had been in operation for many years. That was not the case with those of us who came to Cranbrook in 1918 and 1919. It was a school in the raw, with no background, no traditions, and we had to start our own practices and customs; in other words we had to form the habits and the life of the school from which traditions are born. Of course, we were not conscious of the fact that we were pioneers of tradition, or anything grand like that. We were just schoolboys like yourselves, and hot into much the same scrapes and rows as you do today.

The official opening of the School by Sir Walter Davidson was held in this room on the afternoon of 22 July 1918. It was a very awe-inspiring assembly containing a large proportion of people whom you would probably call 'Big Noises', and was certainly not the place for a small boy of twelve. However, I presume that it had not been made clear to my parents that boys were not wanted till the following day, and they brought me down from the country to the official opening and had to leave me here so that they could catch a train that night.

A similar thing happened to another boy, Peter (F. G.) Millard, but in spite of his company I was very lonely and very, very homesick. The place was big, and empty and cold. It smelled strongly of fresh paint and new linoleum – much too new and impersonal to be homely. The two of us slept that night in the small dormitory over the Junior House dining room, and, again, the sheets were new and very stiff and unfriendly. The towels will be always an outstanding memory of the first months at Cranbrook. They were thick and stiff and rough, and seemed to remove lumps of skin on their barbs, but not the water.

On the morning of the 23rd, again in this room, the Headmaster, the Reverend F. T. Perkins, addressed the whole school of sixty-four boys. We varied in size from about three or four feet, such as Alexander Gordon, Philip Sydney Jones, and the Weekes brothers, to the near six feet of Peter White and J. D. McLarty – a funny ­looking bunch, I've heard it said by one of the present generation, but we found our levels and our friends and settled down quite quickly. The twenty-six boarders were all housed in the dormitories over the present dining ­room, and for the two terms of 1918 the Headmaster and his family occupied the rooms over the Chapel, Masters' Common Room, and the Head's Study.

At the gates where Mr. Hewan lives there was a little stone cottage known as 'The Lodge', and occupied in 1918 by Mr. and Mrs. Everingham. Where the Perkins Building stands there was a lawn, big enough for us to kick a football or play French cricket. The boarders used it in the evenings for a form of progressive leap-frog, which was singularly rough on the clothes and often on the bodies contained in the clothes.

There was no school uniform while I was at school, and the suitings sported were very varied in colour, and likewise the ties and the socks in later years. The youngest wore suits with short pants, as you do, then advanced to knickerbockers, which were like plus-fours, only much worse. Stiff white collars were compulsory wear on Sundays for all boarders – but sometimes a soft one was carried in the pocket when a boy was going out for the day. In mentioning Sunday, I am reminded that we walked to St. Mark's Church every Sunday for a special school service at 10 o'clock, which was also attended by the boarders at Ascham.

The collection was taken up [by] Cranbrook prefects, and there was a famous occasion in a later year when, by strange coincidence, many members of both schools chose to drop numerous ha'pennies, one by one, into the plate, causing embarrassment to the collectors, Frank Crago and Henry White and, of course, delay in taking the collection. The Rector must have smelt a rat, because he became very annoyed and strode out of church without taking the offertory from the waiting prefects, this adding to their already considerable embarrassment.

Now a little more about the grounds in 1918. When the school opened, work on the Hordern Oval was well under way. As can be readily imagined from the height and steepness of the bank on the southern side, a big job of excavation and levelling was carried out to produce the playing fields as it is now. Today bulldozers and like mechanical monsters would have torn away that sandhill in a very short time, but those things were not known then, and all the work was done with pick and shovel, horse and cart, and some funny little skips or trucks which ran on a set of rals. We were not allowed to play trains on this inviting outfit. On the site of the tennis courts there was a very fine rose garden (for the pleasure of the Headmaster), with a fish pond and fountain in its centre.

As you probably know, there was no separate Junior House, or Junior School, during the first year of Cranbrook’s life; then in July 1919, the School Council leased a home called ‘Wyaga’, in Victoria Road, overlooking the School. Mr Gale was in charge of this first Junior House for boarders, which started off with nine boys but increased to twenty-nine before the end of 1919.

Geoffrey Carroll, who in 1924 became our first Old Cranbrookian to join the staff, was the prefect who lived in ‘Wyaga’ and helped Mr Gale and the assistant master keep order. Just before classes began each day we would see ‘Bing’ Carroll coming down the hill, surround by a mob of small boys, and invariably all asked him questions all the time and all together. Small boys never alter – much.

In 1921 the whole of the Perkins Building was completed, and five rooms of the top floor next to the Main School House were taken over for the Junior House boarders at the beginning of secod term. Mr G B Thompson and Mr Chambers were the Masters in Charge at the new quarters, and J G Mawson was the Junior House Prefect. Mr Thompson remained Master in Charge for seven years and later was ordained to the ministry.

In 1941 some of the Old Cranbrookians in the Eighth Australian Division met him in Seremban, Malaya, where he was Rector. He featured prominently in the capture of The Burglar in July, 1921. This gentleman, Petersen by name, fancied the cut of the Cranbrook over coats, for he paid us four visits for the express purpose of helping himself from the racks in the hall outside the dispensary. Apparently he liked mine best, as he took mine amongst others on each of his first three visits, just giving me time to choose a new one before he called again. By the fourth appearance an all-night vigil was being kept by resident masters and prefects.

When he was spotted, all the hunters were warned and went to action stations at various parts of the building and grounds. At a given signal all converged at the double, blowing whistles and whooping like Red Indians in full cry. Peterson was brought down in the drive near the Perkins Building by a flying tackle, and just at this moment Mr Thompson, very excited, arrived on the scene and commenced to belabour the poor man about the head with a cricket stump. He was forcibly restrained before Petersen was quite knocked out. The following day The Sun printed a very amusing parody of Macauley's "Lays of Ancient Rome", the first verse of which went something like this:

By the nine gods he swore

That the proud boarder's overcoats

Pinched should be no more

I spent 1923 very happily as Junior House Prefect. My duties were not very heavy, one of the main jobs being to superintend the daily ablutions of the boarders, many of whom were afraid that their ears, hands and knees would be corroded by contact with soap and water. There were a few exceptions like Welsh and Simpson. You have heard, no doubt, that this job earned for the Junior House Prefect the title of Knight of the Bath, and from accounts which I have heard, there are a couple of prefects in Stacy at the present time who have rather good qualifications for the same title. Perhaps I better not tell you any tales about Mr Gordon Welsh, because he won the boxing championship of the Junior House this year, and he might still be good with his fists.

I said before that small boys do not alter, and remember when I was your age that I always wished that the old buffers who addressed us would stop halfway and get on with the job, so that's what I'll do now. In conclusion may I ask you chaps to keep up the high standard set for you by the boys of 'Wyaga', so that the good traditions of the Junior School may be preserved for those who come after you, even to that, to you, far distant time when your sons will sit on these chairs and be bored by speeches."