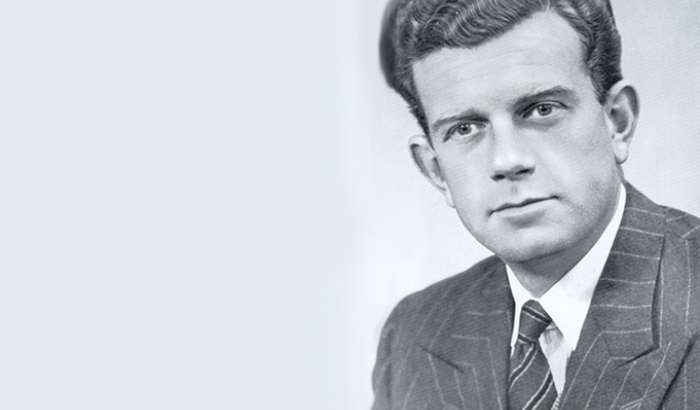 Born in England, Gethyn Elliott Hewan was educated at Marlborough College, Wiltshire, being taught by Cranbrook’s third Headmaster, Brian Hone, in 1934 and 1935. He then went to the University of Cambridge where he graduated MA (Hons) majoring in mathematics and in 1938 was awarded the Andrew Mellon Fellowship at Yale University, USA. Whilst at Cambridge, he was awarded Blues in hockey and cricket.

At the outbreak of World War II in 1939, Hewan returned to England and joined the Royal Horse Artillery as an officer, serving at Tobruk in North Africa and being mentioned in despatches. In 1945, Hewan was appointed as a Mathematics Master at Wellington College, Berkshire, England. He was also a House Tutor and took an active part in cricket, hockey and football.

Cranbrook’s third Headmaster, Brian Hone, had strongly recommended Hewan to Cranbrook's School Council as his successor, Hewan having been one of his students at Marlborough College. Hewan was offered the position of Headmaster in November 1950 and arrived in Australia in April 1951. Gethyn Hewan has been described as a man of strong character and commendable scholastic and sporting abilities, while possessing youthful keenness and enthusiasm. The day after his arrival at Cranbrook, Hewan played in an invitation cricket match and scored 80 runs.

Many of Hewan’s philosophies mirrored those of Hone: the advantages of the House system, pastoral care, and experience in a wide range of extra-curricular activities (such as music, art, drama and debating). He was a founding member of the Australian College of Education and strongly supported the Outward Bound movement. Hewan oversaw the building of the War Memorial Hall in 1953, Dickins House in nearby Rose Bay in 1959 as the Cranbrook Preparatory School, and the Science Building which was opened in 1962.

Whilst living for twelve years in Sydney, Hewan was an outstanding golfer, being eight times winner of the Royal Sydney Golf Championship. He was also a trout fisherman of great skill and a skiier of some ability. He was even a clever conjurer.

Hewan resigned as Headmaster from the end of Term 1, 1963, recommending the Head of Science, Mark Bishop to the position of Headmaster. He returned to England, where he taught for several schools and became the secretary of a golf club.