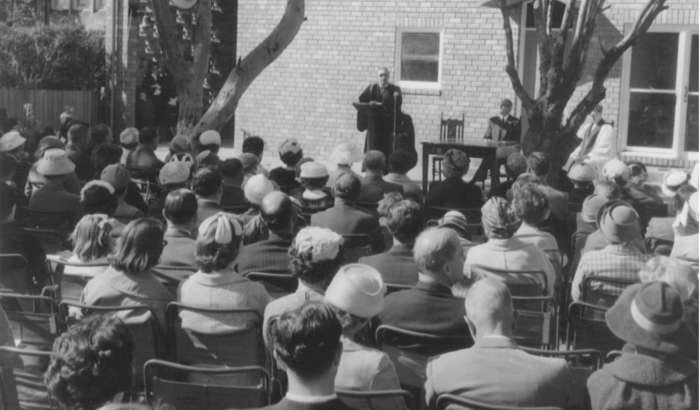 Dickins House was opened in Kent Road, Rose Bay, on 7 October 1959. It was built to house the growing numbers of students enrolling in the Preparatory School. The Cranbrookian reported in 1959 that the new building on Kent Road had enough classroom space for 120 boys, with five classrooms, an art room, staff room and Principal’s office, as well as a large, open verandah onto which the classrooms on the ground floor opened. The paving of the verandah was extended to make a series of terraces that would allow for outdoor classes. It also had “the latest type of play equipment, including sandpits and a sailing boat pond”.

Dickins House was named after the late Mr Alexander H (“Dick”) Dickins, who had made a significant contribution as a member of the School Council and as Bursar of the School from 1939 to 1955. Only 58 years old at the time of his death in 1956, Alexander Dickens had been a successful accountant and a director on the boards of several of Sydney’s leading companies. A friend once described him as having the ability “to create order out of chaos”, a signature skill for a successful financial advisor. He was also described as a simple and lovable man, with a keen sense of humour and infectious enthusiasm.

When Dickins resigned his position as the Bursar at Cranbrook in 1955, the Council unanimously voted for his son to replace him. Mr David Dickens was an Old Boy, having attended the School from the mid-1930s to the mid-1940s. David Dickens served the School in that position for a further 12 years. This meant that the School’s Bursar was a Dickins from 1939 to 1969, an impressive contribution from one family for thirty years.

The Preparatory School had begun life as part of the Junior School in 1934, when boys from five years old were first accepted at Cranbrook and the first female teacher was appointed. The Prep School initially took five- and six-year old boys, adding seven-year olds in 1941. It expanded in 1944 when the St Michael’s and St Mark’s Kindergartens were established. This was important as the enrolments in the Senior School from the Preparatory and Junior Schools effectively saved Cranbrook from a financial crisis during the difficult war years. Prep School numbers steadily grew under the direction of Maisie Hind, from around 30 in 1942 to between 120 and 130 at the end of that decade. Further primary school grades were added in the 1950s and 1960s.

By 2003, the Prep School had come full circle, joining up again to become part of the Junior School. From 2003, it has been officially known as the Cranbrook Junior School.