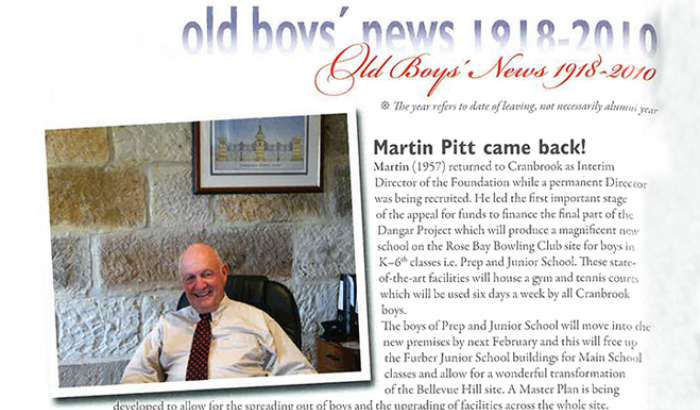 Old boy and teacher Martin Pitt (1939–2010) (OC 1957) epitomised, and indeed played a key role in forming, Cranbrook's values of service to others, global responsibility, and action and teamwork. As a pupil from 1953 to 1957, he was a Senior Prefect and Head of Davidson House.1 As an old Cranbrookian and member of staff from 1976 to 2003, Martin fulfilled the varied roles of geography teacher, rugby and rowing coach, leader of the Explorers and Travellers’ Club, Social Service mentor, Housemaster of Chelmsford and Woodward, Senior Master, Deputy and Acting Headmaster, Secretary and President of the Old Cranbrookians’ Association, and first Director of the Cranbrook Foundation.2

He was highly regarded as the most successful NSW secondary school coach of rugby union for more than 30 years.3 Coaching the rugby teams of our school, The Armidale School, Shore, the Combined Associated Schools, NSW Schools, and St Paul’s College to 1st XV level, Martin was awarded an Australian Sports Medal in 2000.4

Born in Lancashire in 1939, Martin sailed to Australia with his family in 1953 when his father, the Reverend Eric Arthur Pitt, was appointed Dean of Sydney at St Andrew's Cathedral.5 Looking back in an interview, Martin regretted that his “very twee little accent” and father’s position led to some unmerciful hammering by his classmates during his first year of school here.6 However, he quickly earned the respect and admiration of his classmates by getting up to mischief.

According to his best friend Paul Nankervis, Martin “suggested we contribute to the housekeeping by raiding the fruit trees and vegetables” of their neighbor, Sir Edmund Resch.7 This was no mean feat, as Sir Edmund discharged “a 12-gauge shotgun full of salt peter at our retreating backsides”.8 Other antics included letting their air out of his teacher’s cars and short-sheeting their beds.9

After completing his secondary education, Martin received a BA in geography, history and philosophy from the University of Sydney.10 He went on to study at Cambridge and teach at The Armidale School and Shore, before making his way back to Cranbrook in 1976.11

As a teacher, Martin’s “style was to motivate with passion, scheme with cunning tactics, and take no prisoners”, which earned him the respect of his students.12 An enthusiastic adventurer, Martin took the initiative to establish the Social Service group.13 This group has since undertaken many ventures, including the Bourke and Wills trail, the Canning Stock Route, the Birdsville and Kokoda tracks, and the Kyikina Camel Expedition to raise money for organisations like the Royal Flying Doctors.14

During his lifetime, Martin also supported the wider community through his contributions as a board member of the Boys and Girls Brigade, church warden for the Anglican Parish of Braidwood, and his numerous fundraisers to provide country students with the opportunity to extend their education in the city.15

As Headmaster Jeremy Madin observed of Martin following his death, “where he saw the need he acted. And he carried us with him”.16 This teacher’s passionate and pioneering work lives on in our school curriculum and in the form of the Martin Pitt Scholarship.17 Awarded to a talented and passionate sportsman from a rural area, who shows potential as a leader and gives unselfish service, this award allows a boy who otherwise could not afford to attend our school to board with us from Years 7 to 12.18

After Martin’s death, his family donated the Pitt Cup as the prize for the winning the Pitt Dash, originally an annual race around the school. The Pitt Cup is now awarded to the winning House in the inter-House sporting competitions.