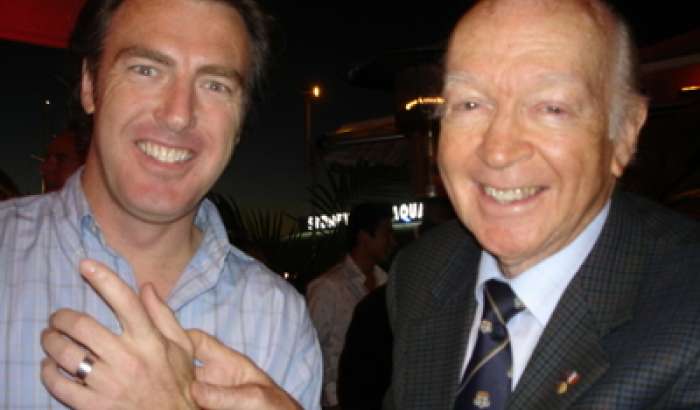 Professor Earl Owen AO was the first surgeon in the world to successfully re-join the severed finger of a child. The man who would later become an important microsurgeon first attended Cranbrook in the late 1930s.

Arriving at the age of eleven, his schooling was soon put on hold, with the return of the cancer with which he had been diagnosed when he was an infant. To conquer his illness, he had to endure eight operations which removed a tumour in his leg and tried to repair the damage resulting from earlier radiation treatment. He returned to Cranbrook twelve months later.

Professor Owen had a productive time at Cranbrook, receiving school prizes for history and general science, as well as piano and painting. He later remembered Cranbrook as a place with “excellent” teachers, who were at times “offbeat” under the direction of Brian Hone, but who upheld a tradition of encouraging the students. He recalled how at that time students who excelled sat in the back row in class, while those who needed the most attention sat in the front row.

The bones in his leg remained weak, and he continued while he was at Cranbrook to wear a leg brace, but he joined in school sports, playing cricket in summer and rugby in winter. He remembered the schoolmasters being flexible in aiding him to make time the most of his sports and music studies.

Professor Owen’s illness brought down his Leaving Certificate results. After school, he bridged the gap with additional courses before university. He went on to graduate from the University of Sydney in 1958 with a Bachelor of Medicine, and Bachelor of Surgery, with the goal of becoming a surgeon.

He would continue to experience limitations from his earlier struggles with his health, requiring a chair to sit rather than stand through his surgeries. This led to an interest in ergonomic design, and to his heading a company that designed chairs for dental clinics.

Professor Owen’s greatest achievement was his work as a pioneer in the field of microsurgery, and he participated in many world firsts. These included the first vasectomy reversal in the early 1970s, the first short-term success in performing a hand transplant in 1998, and the first bilaterial hand transplant in 2000, which was performed for a police officer in Austria who had lost both his hands while defusing a bomb. He would later train the surgeons who performed the world’s first partial face transplant in 2005.

In addition to his successes in the medical field, his love of music that had emerged early at Cranbrook remained an enduring interest. He later lectured in the music department at the University of Sydney and advised Australia’s major symphony orchestras. He was awarded an Order of Australia in 1980, and in 2007 received the Legion d’Honneur for services to French surgery.

Professor Owen’s life had become a shining example of Earl’s grandfather’s favourite saying, which had often been repeated to his grandson when he was a young boy: “Whatever you want to do, you can and you will.  All you have to do is try hard enough.”