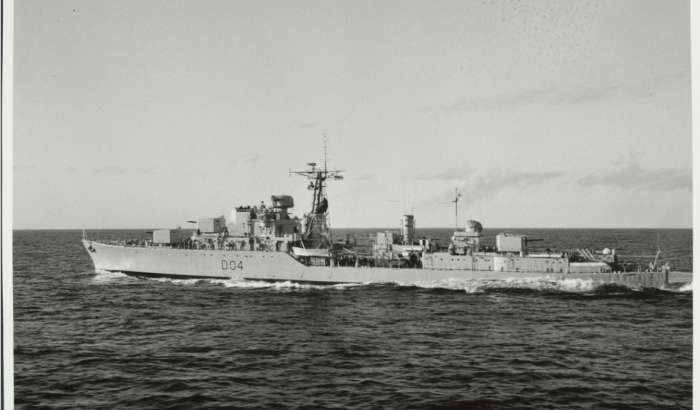 In the middle of a moonless night on 10 February 1964, the 3,500 ton HMAS Voyager sank to the bottom of the ocean 19 miles south-east of Jervis Bay.1 Three hours earlier, the destroyer had been struck by the 20,000 ton aircraft carrier, HMAS Melbourne, during a naval training exercise.2 Tragically, 82 men from the Voyager’s 314 strong crew lost their lives in what remains our country’s worst peacetime naval disaster.3 Former Cranbrookian, Lieutenant James Laidley Dowling (1941–1964) was one of those men.4

A charming and enthusiastic student, James attended Cranbrook from 1947 to 1956.5 Following his time with us, he attended the Naval College at Flinders, graduating in 1959 with an impressive record.6 A Divisional Cadet Captain and member of the college tennis team and cricket XIs, he won the singles and doubles championships in his final year and was awarded the Farncombe Cup for best cricketer.7 Undertaking further training in Dartmouth, James returned to Australia at the end of 1961, when he was posted to the Voyager.8 The promising young sailor was promoted to the position of lieutenant just one year before his death.9

On their final night aboard the Voyager, James and the rest of the crew were acting as plane escort for the Melbourne while it was engaged in flying exercises.10 This was the first time the recently refitted ships had undertaken close quarters manoeuvring in over six months.11 Both were darkened with only navigational and operational lighting in use.12 At 8.52pm, the Voyager, positioned ahead and starboard of the Melbourne, was ordered to turn away, cross the carrier’s stern, and then advance towards it from the port side.13

The destroyer did quickly turn starboard, but then unexpectedly turned port.14 Assuming that the Voyager was fishtailing and would soon alter course, the Melbourne found itself unable to avoid collision when this did not occur.15 As one survivor, Lt. C.G. Nesbit, recalled of trying to escape the sinking ship: “I found myself climbing upwards with water pouring in and chairs and seats falling everywhere. Water kept cascading down. I saw a hole in the forward section of the forward room and out I went”.16 Fourteen officers (including the ship’s commander), sixty seven sailors and one civilian dock worker died at sea that night, with only three bodies recovered.17

There were two Royal Commissions into the incident, neither of which was able to fully explain it.18 Many believed the first Royal Commission was poorly handled, unfairly laying the blame on the Melbourne’s Captain John Robertson.19 This prompted the second Royal Commission in 1967, which found that the Voyager’s Captain Duncan Stevens had been unfit to command for medical reasons.20

While there are several memorials for the Voyager’s lost crew, we continue to remember James through his memorial plaque on the wall of our Chapel and the James Laidley Dowling Memorial Scholarship, which was established by his grandmother Sylvia’s generous donation of $10,000 in 1966.21 The scholarship is awarded to the sons of members of the armed forces, who, like James, have dedicated their lives to the service of others.