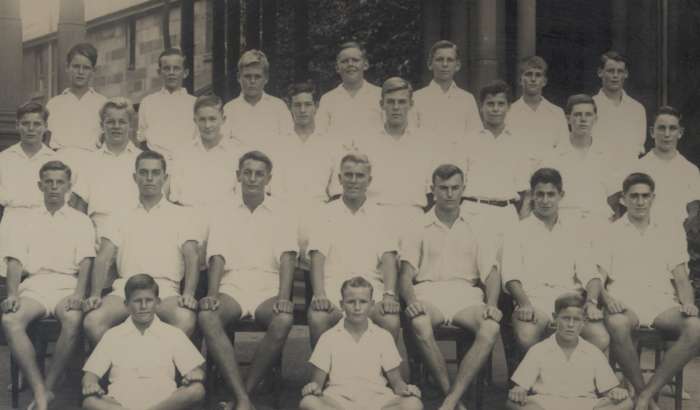 Future Olympian Murray Rose was born in 1939 in Birmingham, England. He came to Cranbrook in 1945, after his family had emigrated to Australia in 1940.

Rose had first learned to dog-paddle in Australia at around the age of two, and his precocious swimming talent emerged early during his time at Cranbrook. The first mention of his swimming prowess was winning the Cranbrook preparatory school junior championship in 1948.

A year later in 1949, only ten years old, Murray competed in the senior championship in the Junior School, winning five events and setting three records. He also entered the under 12 category 50 metre freestyle race, setting a record of 36.8 seconds. The same year he competed in the under 12 category at the Associated Schools swimming carnival, winning the 50 metre freestyle in 37.3 seconds.

Rose broke around 30 records in school swimming events during his time at Cranbrook, both at age group and open levels. He was captain of the Junior School swimming team in 1950. The following year, he competed in the under 13, 14, 16, and open category events, setting or equalling records.

Rose would later remember that one of his proudest moments was as Cranbrook’s captain of swimming, anchoring the open relay to win the Associated Schools championships by one point. It was not only swimming that Rose loved at Cranbrook, however, because in 1955 he appeared in the school production of Caesar and Cleopatra. He was also a School Prefect in 1956.

Rose’s first appearance at the Olympics Games was in 1956 in Melbourne. He was seventeen years old. His family followed a strict vegetarian diet, which had earned Murray the nickname “The Seaweed Streak”. But there wasn’t a wide range of vegetarian food in the Olympic Village in 1956, so Murray ran home each evening to eat with his parents.

Rose would go on to triumph at the Melbourne Olympics, becoming a triple gold medallist. This marked the beginning of a highly successful decade. He would later win three medals for Australia in the 1960 Olympics, and four medals in the 1962 Commonwealth Games. In that time he also attended the University of Southern California, graduating with a Bachelor of Arts degree in 1962.

Over his international swimming career, Murray Rose set fifteen world records and earned six medals in individual and team events — four gold, one silver and one bronze. He was inducted into the Sport Australia Hall of Fame in 1985, and elevated to Legend of Australian Sport in 1999. He was honoured as one of eight flag bearers at the opening ceremony in the 2000 Sydney Olympics.

In his professional life, Murray was an actor, a sports commentator, a sports marketing specialist, and a marketing consultant. He was also an active charity worker, supporting organisations such as the Mary MacKillop Foundation and Rainbow Club Australia. He was awarded an Order of Australia, for his services to swimming in 2000.

Murray battled leukaemia in his later life, dying in April 2012 at the age of 72.