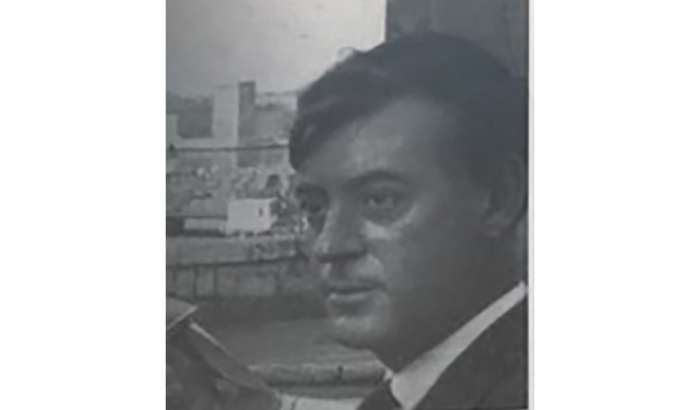 On the walls of our school hang two beautiful paintings. One is an autumn still life of fuzzy daisies, pine cones and leaves that glow in warm reds, oranges, browns, and pinks.1 The other is a portrait of a boy whose dazzling blue eyes stare solemnly at passers-by.2 These artworks were painted by our school’s Art Master from 1946 to 1959, Justin O’Brien (1917–1996).

Known for his sumptuous and colourful religious imagery, moonlit figures, male bodies and Mediterranean landscapes, Justin was one of the major artists of his generation.3 He won the first Blake Prize in an exhibition of religious paintings at Mark Foy’s in 1951 and his work is displayed in the National Gallery of Australia and the Vatican.4

The boy in the portrait, Martin Sharp (1942–2013) (see a profile here), was a student of O’Brien’s, who grew up to become a renowned artist in his own right – a development he credited largely to his “art father”.5 Sharp was not the only celebrated artist to have been taught or influenced by Justin; George Hatsatouris, Brian Dunlop (profile here), John Montefiore (profile here), Owen Tooth, Peter Kingston (profile here) and art historian Anthony Bradley were also his students or colleagues.6 O’Brien is therefore a significant figure in Cranbrook’s history who shaped our school as a hub of the performing and creative arts.

Having joined the Australian Medical Corps in 1939, Justin began at Cranbrook after serving his country in Palestine and Greece.7 During the war, Justin was captured in Ekali.8 He would go on to survive two years and eighteen months of internment, first in Athens and then in Torun, Poland.9 The pressure of dressing the wounds of up to sixty patients a day and regular bombing raids did not prevent Justin from painting. During his imprisonment in Athens, Justin polished the medals of the German officers and made “sure their hair was beautifully clean and white” before painting their portraits.10 In exchange, he would receive brushes and paints.

The resourceful artist remembered using his limited art supplies to paint the view of the Parthenon and Peros Harbour from the open rooftop of the hospital with his fellow prisoner, New Zealand artist Austin Deans.11 In 1944 Justin finally began his long journey home after being exchanged for German prisoners of war held in Barcelona.12

Following his return to Sydney, Justin joined the Merioola Group, a group of artists, dancers, writers and actors who were put up in the Victorian mansion of Chica Edgeworth Lowe and were both celebrated and derided for their “charming” light-hearted works.13 As O’Brien recalled, “practically all of us had been at war”, and their subject matter was in reaction to its horrors.14

In Cranbrook, Justin found a workplace that he “always thought was rather like a family”.15 He built our Art Department from the ground up with limited supplies, by introducing weekly displays of student art to the walls of the Perkins Building stairway and “glowing” scenery for our school plays created with “rollers of brown paper patched together with adhesive tape”.16

Looking back on his time as a teacher, and the talents of his students, Justin noted that although certain students “had incredible talent and imagination, and everything else”, “over a period” it would sometimes sizzle out. Often, he would instead discover that “a student who finds it harder to do it, after a lot of hard work and so on, becomes much more interesting than the one who finds it terribly easy”.17 This statement illustrates Justin’s attitude towards creativity: he instilled in his students a spirit of intellectual curiosity, but also disciplined process, that we continue to foster to this day.