Facing Off with Scots 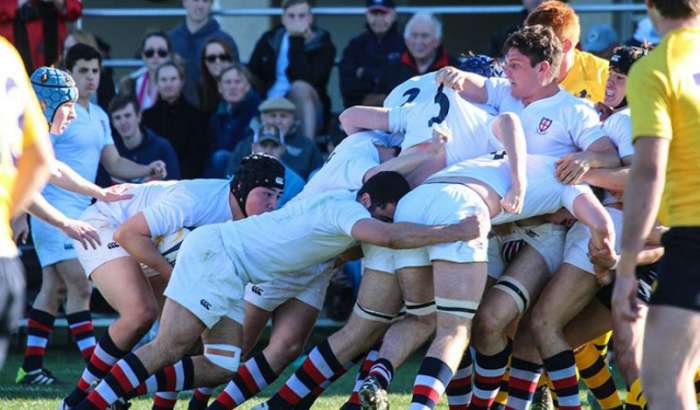 Pairs of schools, especially those in close proximity, often form a sporting rivalry.1 Cranbrook has long enjoyed one such rivalry with The Scots College, which quickly developed following our school’s establishment just down the hill from them in July 1918. Built upon a heady mixture of testosterone, youthful energy, screaming supporters and elite talent, our rivalry with Scots annually culminates in a grudge match to end all grudge matches: the so-called "Battle of Bellevue Hill".

Formed over twenty years before us in 1895 at St Killians, Bellevue Hill, the Scots College community was very generous towards Cranbrook in its earliest days. In 1920, Scots loaned Cranbrook weapons to create its cadet armory.2 In 1932, when the Depression forced us to scrap plans to construct a new rowing shed, Scots shared their boatshed – an arrangement that would last until the early 1950s.3

Following this kindness, they also worked with us to develop a highly successful sailing program under the guidance of Bill Furber, Rear-Commodore of the Royal Prince Edward Yacht Club.4 With these early generosities, Scots helped to build our fledgling school into a worthy competitor in cadets, rowing, sailing, cricket and, of course, rugby.

Many a former Cranbrookian has laughingly recalled the joking refrain that Scots College boys used to sing at them: “Tiddlywinks young man, run as fast as you can, if you can’t get a woman get a Cranbrook man”.5 Old Boys Chris Meares and Frank Tebbutt remembered being on the receiving end of taunts such as “sissies, or tiddly-winks, or a bunch of women” on the bus as the Scots students raised their hats and gave up their seats.6

Thankfully the current promotion of women in sport is causing the notion of “kicking like a girl” to fade quickly, but it was “quite provocative” in the mid-twentieth century.7 By 1942 our boys had “decided that enough was enough” and “set upon quite roughly and sent packing” several Scots boys “trespassing” on our school grounds, prompting a larger fight the following week.8 According to Martin Pitt, fights also regularly occurred at the combined school cadet navy training, with plenty of boat ramming, cannon pulling races, and “fists flying”, which ultimately led to the dishonorable discharge of the Cranbrook cadet unit.9

Regarding the fight on school grounds as “a serious matter”, in 1942 the two schools arranged a football match as an alternative outlet for their boys’ patriotic energy: the Battle of Bellevue Hill.10 Named after The Battle of Vinegar Hill – an engagement during the 1798 uprising of the United Irishmen – the inter-system rugby match is held annually to this day.11

The underdog for decades, Cranbrook has only won the battle seven times, which makes victory all the sweeter when it occurs, as it did in 2010, when our 1st XV defeated Scots 13-7.12 Indeed, the “robust and cheerful rivalry” with our friends up the hill has helped many generations of our students to develop the school values of action and teamwork, by teaching them valuable lessons about resilience, challenge, courage, failure and success.13