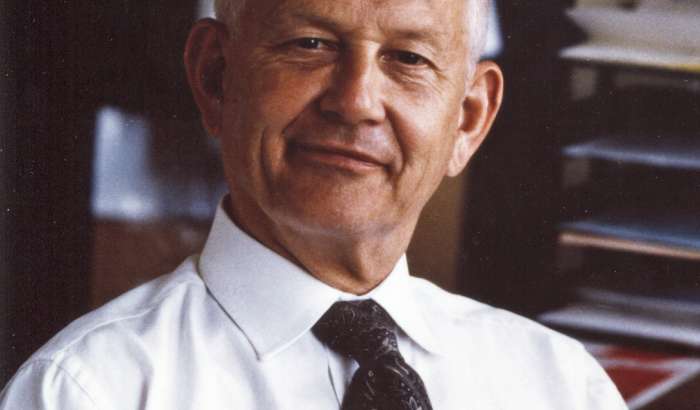 A word of explanation at the very onset. Joklik was not known as “Bill” at Cranbrook, he was Joklik 1. At Sydney University, however, first names were the rule, and there he was so appalled by what people did to “Wolfgang” that he quickly adopted another first name starting with W, namely William, so that from then on, throughout his life, he was known as Bill, and signed himself as “Bill” on all but official documents.

A native of Vienna, Austria, he was the older of the two sons of Karl Friedrich Joklik and Helene Giessl Joklik. Early in 1938 he arrived in Sydney with his family, where his father, an engineer, was General Manager of the Australian branch of the Austrian company Styrian Steelworks, manufacturer of fine steels. At the outbreak of World War 2 his father, being an Austrian citizen, was interned, as were all adult males who were citizens of countries with whom Australia was at war. Cranbrook, to its everlasting credit, remitted the fees for both him and his brother. In profound gratitude to Cranbrook and as a tribute to and in memory of their mother, his brother Frank and he endowed, in 1987, the Helene Joklik Endowment.

Bill was Dux of the Sixth in his final year and won the Aubrey Halloran Prize for Latin and the Chard Prize for mathematics. He passed the Leaving Certificate with first Class Honours in Latin and was awarded a University Exhibition. He was a member of the 2nd Cricket XI and the 2nd Rugby XV in 1943.

He graduated B. Sc. from Sydney University with First Class Honours in Biochemistry in 1947, followed by M.Sc. in 1948. He was then awarded an Australian National University Scholarship for study at the Sir William Dunn School of Pathology at Oxford, the Director of which was Sir Howard Florey, of penicillin fame. Bill graduated with a D. Phil. from the University of Oxford in 1952. He then did a year’s postdoctoral work in Copenhagen, worked for eight years at the Australian National University in Canberra and then for six years at the Albert Einstein College of medicine in New York. In 1968 he was appointed Chairman of the Department of Microbiology and Immunology at Duke University Medical Centre in Durham, North Carolina, a position he held for 25 years until he retired in 1993.

Bill’s field of research was Virology. Trained as a biochemist, he was one of the pioneers of Molecular Virology. His work on the molecular mechanisms underlying how viruses infect cells, multiply and cause disease laid the groundwork for the development of vaccines and antiviral agents. He published more than 250 research papers and reviews, and for 25 years was Editor-in-Chief of Zinsser Microbiology, one of the two leading texts for medical students.

His work was widely recognised. He was elected to the National Academy of Sciences in 1981, the highest scientific honor in the United States, and to the Institute of Medicine in 1982. In 1991 he was awarded the ICN International Prize in Virology. He founded the American Society for Virology and was its first President in 1982. He was President of the American Medical School Microbiology Department’s Chairmen’s Association in 1979. At Duke he was elected a James B. Duke Professor of Microbiology and Immunology in 1972. He played a leading role in founding the Duke Comprehensive Cancer Centre in the early seventies.

Strongly rooted in two cultures, the Austrian/German and the British/American, Bill will be remembered as a true world citizen, greatly interested in international affairs, a devoted husband, father, and grandfather, a life-long traveler, a lover of classical music, and an outstanding scientist, teacher and mentor of almost one hundred graduate students and postdoctoral fellows whose well-being and success were always uppermost in his mind. Nothing gave him greater pleasure than launching them into strong scientific careers. He maintained cordial relations with many of them for many years, advising them, nominating them for promotions, visiting them worldwide and greatly enjoying return visits from them. He loved hearing of their often very significant successes. He loved coming back to Australia to lecture (on one occasion he was Australian Biochemical Society Lecturer in all Sates), attend meetings, carry out Site Visits and attend Retirement Celebrations for friends.

Bill married Judith Vivien Nicholas of Perth in 1955. Together they had a son and a daughter. Judith succumbed to breast cancer in 1975. In 1977 he married Patricia Hunter Downey. He is survived by Pat, his son Richard of Columbia, MD and his family; his daughter Vivien of Cary, NC and her daughters; his brother Frank of Salt Lake City, UT, and his family.; and a son and three daughters of Pat’s first marriage and their families. Together Pat and he had seventeen grandchildren.