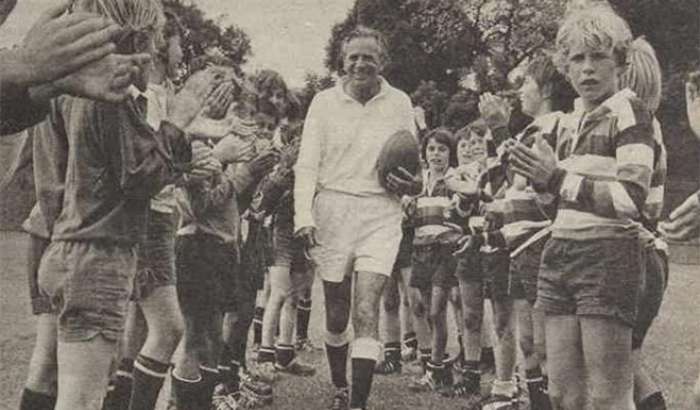 "Moyso", as he was affectionately known to his students, was a teacher at Cranbrook for 29 years.

Guy Moyes was from Adelaide, but had moved to Armidale, NSW in 1929 when his father was appointed the Bishop of Armidale. Guy’s father chaired the board of The Armidale School, at which Guy was a student.

Guy later went to the University of Sydney, where he resided in St Paul's College amongst contemporaries that included the future Prime Minister, Gough Whitlam. He completed a Bachelor of Arts degree majoring in mathematics, English, and psychology. After graduation, Moyes worked as a psychologist, spending two years doing program analysis for the Australian Broadcasting Commission, which at the time broadcast only via radio. He took up his first teaching position in Moss Vale, New South Wales, at the Tudor House School.

Guy Moyes joined the war effort in 1940, entering the second Australian Imperial Force, which had been established in 1939 to fight in WWII. Moyes fought until the war ended in 1945. Soon after returning to civilian life, the Headmaster of Cranbrook, Brian Hone, asked him to join the Senior School staff as a mathematics and science teacher. He began teaching at Cranbrook in 1946.

An article published in the Australian Women’s Weekly when Guy Moyes retired from Cranbrook described him as “the prototype of everyone’s favourite schoolmaster, a friendly, courteous man, with laughing eyes that miss nothing". He commanded respect amongst his students so that he didn’t need to raise his voice to make his point. Guy Moyes said of his teaching style: “I believe I’ve got what the boys call, 'the Moyes look'. Often I don’t saying anything, I just give them a look”.

In 1953, after 8 years on the teaching staff, Moyes was appointed Master in Charge of Cranbrook's Junior School, and he made a significant contribution there until his retirement in 1974. He wrote a report in 1969 to the then-Headmaster, Mark Bishop, about the limitations of the Junior School's classrooms and accommodation, recommending that a new Junior School be built. He advocated for change and although it took until 2012 to fulfil Moyes’s vision, it was ultimately realised.

Moyes had a great love of sport, and coached cricket and football at the school until his last day. This was a family love, with his uncle, Johnny Moyes, having played for South Australia and Victoria. His uncle would later become a popular cricket commentator on the ABC in the 1950s and early 1960s. Guy’s other uncle was Morton Henry Moyes, an explorer who had undertaken three Antarctic expeditions for which he was awarded Polar Medals in silver and bronze and a bronze clasp, and appointed OBE in 1935.

As a schoolmaster, Guy Moyes cared deeply for the students and enjoyed seeing the boys foster their strengths and individuality. He made the observation on his retirement that students had changed greatly through the pre- and post-war periods. “Before the war, discipline was very strict in homes and schools. Children were not encouraged to voice their point of view. Today they do, and they are much more interesting for it.”