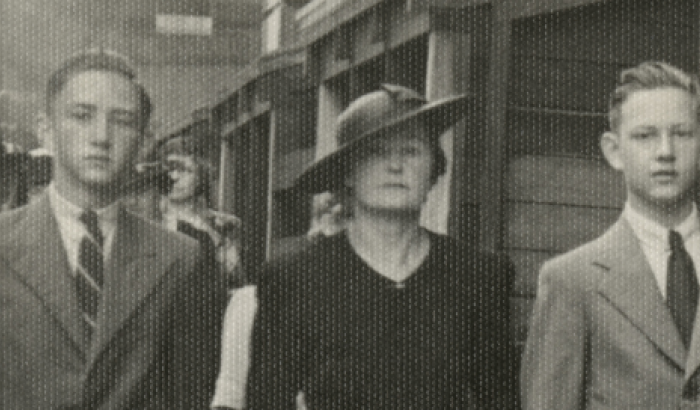 The Joklik family arrived in Sydney from Vienna in February 1938 aboard the P&O liner Orion.  The family consisted of Karl Friedrich Joklik, Helene Adele Joklik and their sons Wolfgang Karl (Bill) and Guenther Franz (Frank); the brothers were aged 11 and 9.  Their father, an electrical engineer, had been tasked by an Austrian specialty steel company to open offices in Australia.  After a brief review, the family decided on Cranbrook for the boys.  They adapted quickly in class and sports, and established long lasting friendships.  The Jokliks were a happy family, but when war broke out in 1939 Karl was interned for the duration of the war as an "enemy alien" on account of his Austrian nationality.  From then on the brothers' lives depended on their mother's ability to cope.

For a while she and her sons depended on a modest weekly sustenance allowance from the liquidation of Karl's office, but this resource was gradually reduced to nothing. Helene, a vivacious, talented teacher and musician knuckled down as a domestic worker to support her sons' education.  She bore the drudgery with resignation.  Aware of their mother's sacrifice, Bill and Frank took up all Cranbrook had to offer.  They admired their teachers and enjoyed sports.  Based on their performance the School Council partially waived school fees.  WIthout this act of generosity the boys would have had to leave the School.  As it was, both were Dux of their respective forms, passed the Leaving Examinations with First Class Honours and were awarded Public Exhibitions by the University of Sydney.  Helene eventually returned to Vienna to rejoin her husband who had been repatriated.  She fondly remembered Australia despite the hardships she had endured.

The Joklik brothers went on to have highly successful careers. Their post doctoral paths diverged in that Bill, a virologist chose academic research whereas Frank, a geologist and mining engineer, pursued his profession in industry.  Bill accepted several prestigious research appointments in Australia, Europe and the United States before being appointed James B. Duke Professor Emeritus of Molecular Genetics and Microbiology at Duke University.  He is known as "one of the earliest molecular virologists", was editor in chief of the keystone medical textbook, Zinsser Microbiology, and a multiple award winner for his research.  Frank's leadership was key to launching successful metal mining projects in Australia, Papua New Guinea, the United States and in Spain. He became President of Kennecott, a large American mining company, directed the company through difficult cost reduction measures and rebuilt its operations.  Both Bill and he received wide peer recognition with membership in the National Academies of Science and Engineering respectively.

In 1986 the brothers established the Helene Joklik Endowment at Cranbrook to provide scholarships for boys, like them, who have leadership potential and come from families with limited means. Both brothers attribute their achievements to the confidence, perseverance and sportsmanship they learned during their formative years at Cranbrook.