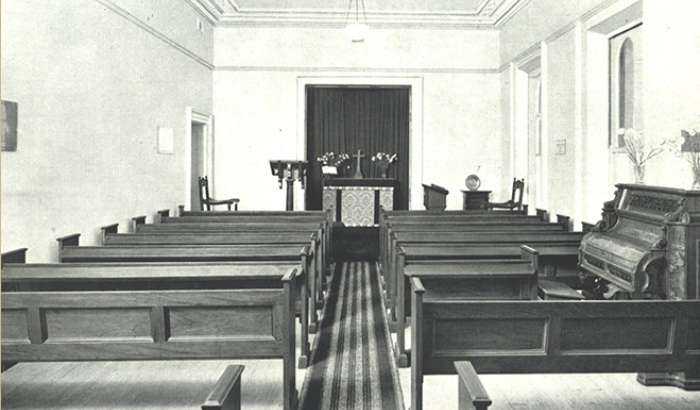 Today Cranbrook does not have a School Chapel, students visit the Carter Hall for Chapel Services. Previously students attended regular church services in the Old School Chapel (completed in 2015) on the top level of the Carter Building. Above this calming space hung a large star-spangled steel cross, designed by the late Martin Sharp, and elsewhere there were plaques dedicated to past students, including a World War II Honour Roll of sixty-four Cranbrookians who made the ultimate sacrifice for our country.1.

For its first fifteen years, from 1918 to 1933, Cranbrook did not have a chapel.2 During these early days, our students would walk to St Mark’s Church every Sunday morning where they were warmly welcomed by the Reverend Canon Howard Lea (a founding member of our school).3

Errol Bode remembered this “Church Parade” as an uncomfortable affair due to the stiff collars that the boys were expected to wear.4 Prior to setting out they would line up for the head prefect to “flick each collar that looked suspicious”.5 Nevertheless, Errol was always one step ahead, as he “stuffed the soft one in the inside pocket” of his school blazer to put on later.6 (Read more about these collars here.)

Whilst the church became an important sanctuary of worship for many of our boys, some of their school-day motivations for attendance were not entirely spiritual. David Mitchell laughingly recalled a Confirmation service in which one boy emptied the cup of Communion wine, excusing himself because the minister had said “'drink ye all of this', and I did”.7 Meanwhile, a former choirboy, Edward Sly, remembered joining simply because “if you were a member… you were taken to the pictures every six months”.8

Robert MacKay Brown spent most of his Sunday services distracted by one of the Ascham girls, named Miranda, who sat on the opposite side of the aisle. Despite hearing that he “had no hope” because Miranda “was interested in a boy from Riverview”, Robert persisted in his pursuit and slipped her a poem, which read: “Sweet Miranda, wherefore wander with a river view, but stay and wander with a fander one who is mad on you”. The poem worked a treat and the two set off on a date the following Saturday.9

These encounters with the Ascham girls were not to last, however, as in 1934 the School Council finally employed their first chaplain, the Reverend George Wyatt Earp, and established their own chapel consecrated by the Archbishop of Sydney, H.W.K. Mowll.10 Positioned in the prefects’ old games room, this “temporary” chapel ended up serving as the spiritual centre of our school for just over 80 years. Despite its small size, it was a dignified and harmonious space of worship for the many boys who passed through our doors during these years, with its cedar pews and Winchester canvas kneelers lovingly sewn by Headmaster Gethyn Hewan’s wife, Peggy.11

Today, the rapid pace of life often denies us the time and skills to reflect on our experiences and absorb valuable lessons. By continuing this rich Anglican history in our new Chapel, we still encourage our students to explore their own spiritualities. This is of central importance in a modern world that too often turns away from reflection and spiritual awareness.