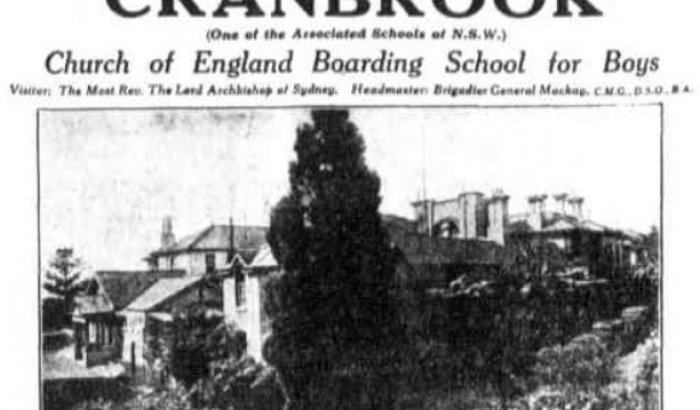 On 29 October 1929, the Wall Street stock exchange crashed and $26 billion disappeared from the global market.1 At the height of the Great Depression in 1932, unemployment had soared from 10 to 32 percent after a succession of bank failures, collapsing investments, falling commodity prices and trade reductions.2 Most Australians were struggling to survive and Cranbrook was under strain.3

In 1933, a new Headmaster arrived at Cranbrook: Brigadier Iven Mackay (1882–1966). Mackay found himself settling in to his new post as he confronted a situation in which little had been done to arrest declining enrolments, which had dropped from 311 to 211 in the three years prior to his appointment.4

Mackay tackled the “enormously difficult task” with his usual vigour, putting into action many initiatives.5 He lowered the school entry age to five years old, creating a new emphasis on the junior years.6 He also began to raise awareness of Cranbrook in an advertising campaign. Circulars went to churches and parents, and advertisements were placed in newspapers.7

At the end of 1934 and 1935, for example, Mackay ran advertisements in The Farmer & Settler newspaper (see the photo above) to spur enrolments for the following year. The ads appeared alongside articles that described the many advantages of Cranbrook: the school was described as being “equipped for every phase of education” and it produced “capable and responsible citizens”.8 The article in 1935 was longer than the previous year, and it is possible to see how the school was learning to improve selling its services in this tough climate. Mackay also had to make cuts to both teaching and domestic staff to reduce overheads and redress spiraling debt.9 Cranbrook was £55,000 in debt by 1936 and had only just managed to hold onto its remortgaged playing fields.10

Mackay did a great deal to raise the spirits of the school, additionally focusing on discipline, the uniform and academic performance. Staying true to his superlative military training and experience, he proved to be a “practical and energetic” headmaster.11 But for most of Mackay’s time as Headmaster, the School Council was consumed with finding ways to reduce the school’s debt.12 Tensions between Mackay and the Council escalated gradually, with some in the school seeing him stretched too thin between his love for the Army and his care for Cranbrook, or being “rigid” and lacking “the human touch”.13

The wrangles reached their height in the last years of the 1930s, with the advent of WWII late in 1939 effectively bringing it to a head. The Headmaster left Cranbrook early in 1940 to re-enlist in the Australian Imperial Force, having been backed into a corner with the Council. Many parents withdrew their sons in protest, plunging Cranbrook into crisis once again. The school lost more staff, now not from retrenchment but from enlisting in fighting forces; and rationing and other war disruptions would soon take a new toll.

Many Cranbrookians who were there during the Depression lamented later that their education was compromised, or cut short, by forces outside of their control. Old Cranbrookian Ian Platt-Hepworth “had to leave school a year earlier than I would have liked”, when his father sent him to work at sixteen, viewing his son’s further education as a “waste of money”.14 Many parents were doing the same around the country.

Looking back, Edward Sly remembered his school days as “probably the best days of your life”, but he also remembers that he was forced to finish “because of the Depression and it wasn’t long after that, that I was at war”.15 Other families only managed to keep their children at school by sending them in alternate years.16 Hardships hit Cranbrook boys in other ways, with Ian Platt-Hepworth recalling the hockey team making their own sticks by “raiding local willow trees”.17

Sometimes, necessity was the mother of invention: with no tuck-shop money, Ian joined other boys to collect macadamias from a tree behind the gym, using “the hollow of a brick, and … the flat side of another brick” to crack their hard shells.18 Evan Lewis remembered exchanging car trips to school for “terribly exciting” motorbike rides, with his parents boarding a couple in financial straits in the family garage.19

Remembering the confronting sight of “people sleeping under rock ledges and in hessian humpies around the domain” in Sydney, and working class children at Double Bay Public School without socks and shoes, Cranbrook Old Boys also remember recognising their good fortune.20 “Incredibly privileged and shielded” from the worst impacts of the Depression, they made the most at the time of their supportive school community.21