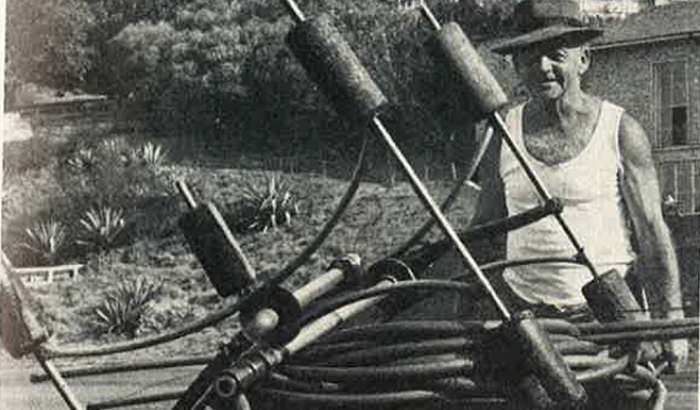 At 6.45am every day from 1940 to 1972, Cranbrook's groundsman George Eccles (1901–1973), a short man with a deep tan and twinkling blue eyes, could be seen on Hordern Oval.1 Walking by, you would have found him carefully directing a horse-drawn mower up and down the oval, stopping every now and then to fix any irregularities in the growth.2

In the cricket season, George’s horse donned large leather boots and the mower was swapped for a large concrete roller to maintain three centre wickets.3 Prior to George, Hordern Oval was a “shocking” mess of “rubbish, garbage, and building materials”.4 Thanks to his efforts it became the “perfect cricket pitch”, used by the NSW cricket team when their own ground was unsuitable, and highly regarded by visiting international cricket teams, particularly England and the West Indies.5

However, groundsman George should be remembered not only for his role in developing our magnificent surrounds, but also for his role as a wise counsellor and friend to generations of boys and staff.

Little is known of George’s early life. We do know that George, like many other lads growing up during WWI, finished school at the age of twelve to start work.6 Prior to commencing with us, George worked as a groundsman at Sydney University.7 Once he began at Cranbrook, George set to work establishing Hordern Oval, in addition to skilfully developing its banks and all of our lawns, gardens, gutters, drains, pathways and steps.8

Groundsman George has been fondly remembered by past students for his “unaffected manner”, “sense of values”, general patience, but intolerance of “anyone who didn’t know his job”, his “quick dry wit”, and “fund of stories”.9 These qualities are clearly seen in a story, told by Jim Patterson, which concerns George’s love of his carefully maintained oval.

Apparently, one day during his daily morning rounds, George uncovered several small indentations in his perfectly manicured grass. After uncovering the same small marks in a different part of the oval the next morning, George decided to visit the office of Headmaster Gethyn Hewen. He explained the situation, leaving Hewen in no doubt as to what would happen to the perpetrator. Immediately after this conversation the strange indents disappeared. Little did George know that Hewen was the culprit! A keen golfer and winner of the Royal Sydney Club Championship, the Headmaster had been using the oval to practice his wedge shots.10

The universal adoration that past students felt for George can be seen in many such stories and other fond reflections.11 These come from sporting Cranbrookians and also from other students and staff who saw George as “someone ‘to turn to when life was too much for them’”.12 Many valued his friendship and sought his advice well beyond their school years, bringing their girlfriends, wives, and children back to his little office in the gym, “almost as if he was a grandfather”.13

Our old groundsman thus exemplified the school's values of generosity of spirit and service to others, dedicating the greater part of his life to building not only our grounds, but our school community, despite temptations and invitations from those who sought his talents elsewhere.14