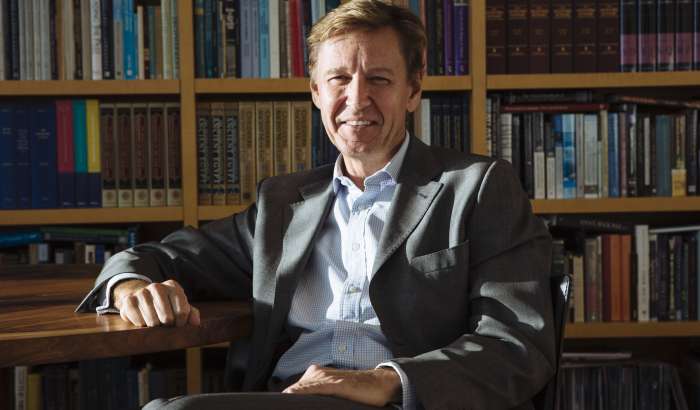 Dr Timothy Potts (OC 1975) is a world-renowned curator and has been the Director of the J Paul Getty Museum in Los Angeles since 2012. The Getty is one of America’s most prestigious and richest museums. Funded by the J Paul Getty Trust, it presently has a $3.5 billion endowment and an annual operating budget of about $280 million.1

Timothy Potts came to Cranbrook in 1964 and graduated in 1975, which was during Mark Bishop’s time as Headmaster. Bishop expected a high level of academic achievement from Cranbrook students, and involved himself fully in their progress.2 He would not have been disappointed in Timothy Potts, who was a highly intelligent student, and showed aptitude in subjects which would later affect Potts’s career path, such as ancient history and art. In his graduating year in 1975, Timothy was joint Head of the Sixth Form, and joint winner of the David Turton Prize for Biology. He won the Maxwell Prize for Ancient History, the David Turton Prize for General Studies, the Classical Essay Prize, and the Senior Painting Prize.3

When Timothy left Cranbrook in the mid-1970s, he chose to study archaeology and philosophy at the University of Sydney. His field work was at the University’s digs at Pella in the foothills of the north Jordan Valley. “It was a Chalcolithic (or Copper Age) site—houses and temples and refuse of daily life, everything from pottery to wall paintings.”4 Excavations at the Pella site have unearthed many important world discoveries. These include Neolithic housing circa 6000 BCE, a Late Bronze Age Egyptian governors’ residence with clay tablets (circa 1350BCE), and large areas of a Hellenistic city destroyed by war in 80BCE.5

Potts can remember always wanting to be an archaeologist from a young age—“I still have books from my 11th birthday … on Egypt and Mesopotamia, Greece and Rome, the great civilisations of the old world”.6 Timothy graduated from the University of Sydney with a Bachelor of Arts with first class honours, before going on to complete a DPhil in Near Eastern art and archaeology at the University of Oxford. He was able to continue his fieldwork at Pella, becoming its co-director in the late 1980s.

Potts saw his future in museums when he curated his first exhibition for the National Gallery of Australia, called “Civilisation: Ancient Treasures from the British Museum”. “It seemed to me that museums offered the best of both worlds, putting your academic background and knowledge to use in exhibitions and publications that have a much broader audience and impact. That was an exciting revelation to me.”7

Before arriving at the Getty, Potts was director of several art museums, including the National Gallery of Victoria in Melbourne, the Fitzwilliam Museum in Cambridge, England, and the Kimbell Art Museum in Fort Worth, Texas. While at the National Gallery of Victoria, Potts oversaw a $76 million redevelopment of the existing museum and the addition of a second site in Federation Square devoted to Australian art.

The President and CEO of the Getty Trust, James Cuno, has described Potts as “a person of integrity, intelligence, advanced learning, and refined connoisseurship”.8