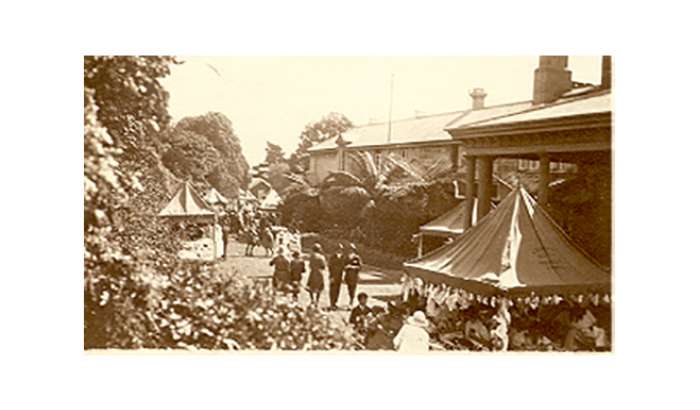 The School Fete has been a key event on Cranbrook's calendar since it was first held on 23 September 1922.1 On this sunny Saturday afternoon the school driveway was transformed into a sea of red, white and blue striped tents selling an array of refreshments and wares, including jams, cakes, fruit and nuts, sweets, tobacco, flowers, aprons, towels, second hand books, toys, pictures, antiquities, surprise “shilling parcels” and the ubiquitous lucky dip.2 This first fete was run by the wives of members of the School Council. Dressed elegantly, these women produced the goods and managed the stalls to raise £2,280 that year.3

Originating in the twelfth century, the contemporary fete, with its mélange of stalls, face painting, fairy floss and rides, is part of a much longer tradition known as the fair, festival bazaar, or carnival.4 The very first fairs were held by worshippers who gathered “within or about the walls of abbeys and cathedrals on the feast days of the saints enshrined in them".5

From these religious beginnings, fairs gradually became commercial events in which merchants offered revellers a range of goods and amusements.6 In 1813, with the establishment of an annual “fancy work” sale by the London-based Ladies Royal Benevolent Society for Visiting, Relieving and Investigating the Condition of the Poor, the charity fair emerged as the domain of “leisured” women.7 Providing middle-class women with a public space to exercise their creative and organisational skills, these events allowed them to participate in commerce within the socially acceptable confines of philanthropy.8 From early colonial settlement, the charity fair was widely adopted throughout Australia as a means of raising funds for institutions.9

By organising the annual school fetes, in addition to other charity events, the mothers and wives of the earliest Cranbrookians played a central role in keeping the school afloat. The funds raised by the 1922 Fete allowed Cranbrook to push ahead with purchasing the land initially known as the Rose Bay Playing Fields.10 Likewise, the £6,000 raised by the 1950 Fete contributed to the School Council being able to approve the construction of the planned War Memorial Hall the following year.11

More recently, the 2003 Carnivale, which included entertainment from musician and parent Jimmy Barnes, raised a massive $220,000 for the school, enabling it to construct a new IT and Robotics Centre and update the War Memorial Hall with a new sound system and lighting.12 After the Carnivale, Barnes reflected: “Isn’t it amazing how much the school community has been able to accomplish, on its own, just through dedication, hard work and love? I feel proud to be a part of it".13

The organisers of Cranbrook's earliest fetes never could have imagined the large scale of this more recent event, or the uses its funds would be put to, but it was their early efforts that made it possible.14