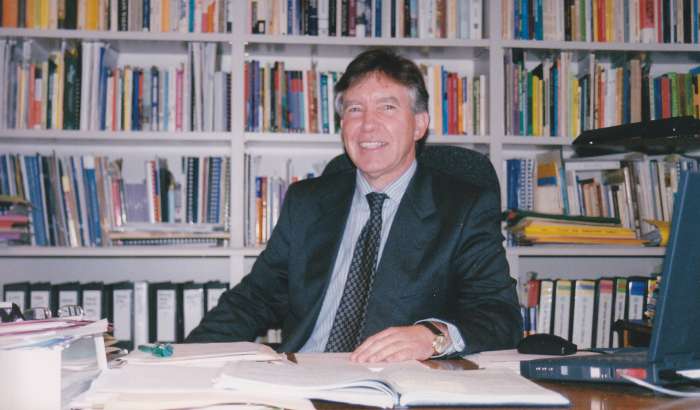 It is widely acknowledged that Jeremy Madin was one of the most transformative and extraordinary Headmasters to serve at Cranbrook. Not only was he a steward of the past traditions of the School, but his belief in the goodness of all men and his invincible optimism allowed him to make positive and significant organisational changes to the School over the eleven years he was Headmaster.

Born in Geelong, Victoria, Jeremy Madin boarded at Geelong Grammar School from 1960 to 1964. In 1969, he graduated from the Australian National University with a Bachelor of Arts with Honours in History and in 1972, he received a Diploma in Education from Canberra College of Advanced Education. From 1970 to 1973, Madin taught English and History at Canberra Grammar School.

After a year of graduate studies and tertiary teaching at Canberra College of Advanced Education, he moved to Sydney to lead the Social Education Materials Project for the Headmasters’ Conference of NSW for two years. In 1977, he was appointed Lecturer in the Diploma of Education program at the University of Sydney.

From the University of Sydney, Madin returned to Canberra Grammar School as Head of the History Department from 1979 to 1981 and in 1982, he was appointed as Housemaster to one of the boarding houses. In 1983, Madin was appointed Head of Timbertop, a co-educational boarding campus of Geelong Grammar School, located in the mountains of northeast Victoria. He moved to Perth in 1988 to assume the role of Headmaster of Christ Church Grammar School.

In January, 2001, Madin became the seventh Headmaster of Cranbrook School. Over the decade he was Headmaster (he retired in mid-2012), he was squarely attuned to the amalgamation of the junior campuses of the School to create one Junior School, which was finally achieved in 2012 with the opening of new Junior School buildings on the Dangar site of the original Dickins House, Rose Bay. Madin referred to it as a ‘School in a Park’.

Closely associated with this development was his commitment to introducing a common language of teaching and learning for all levels of the School community. He believed this to be his most important legacy. Under his headmastership, the Rose Bay Bowling Club was acquired (2001), the Justin McDonald Stand was completed (2004), and the heritage-listed John Saunders Pavilion (known also as the Rotunda) was refurbished (2006).

His leadership and support for the Cranbrook In The Field activity (Years 7–10) led to its becoming one of the most prestigious and respected school courses in outdoor education in Australia. He also initiated the search for an outdoor education campus for Cranbrook, which has since resulted in the acquisition of the Wolgan Valley campus.

To see an interview that Jeremy Madin gave to the Old Cranbrookians' Association in 2012, click here.