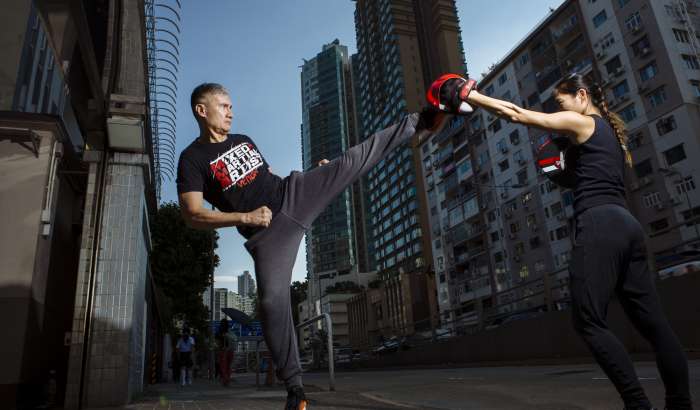 During his time with us from 1979 to 1982, Antony Stezo showed himself to be a gifted and versatile student. A former School Prefect, he was also the leader of the kayak club, a strong soccer player and the recipient of the J. Rankine Prize for Computer Studies.1 Antony has carried this versatility and adaptability into his career as a competitive martial artist and ballroom dancer, qualified stunt man, senior executive of a shipping company and, most recently, an internationally award-winning film director and producer. Antony’s career trajectory displays his commitment to creativity and exploration and constant pursuit of personal best.

To complement his martial arts training, Antony trained with the Sydney Dance company for two years, and was also schooled in stunt work.4 He went on to compete in ballroom dancing and qualified as a stunt performer with NSW Equity.5 In 1994 Antony formalised his talent for performance with a degree in finance and media productions from Bond University where he topped his year, receiving the Excellence in Student Film Direction award and the award for Best Overall Achievement in Video Production.6

Before finding fame as an actor and producer, Antony pursued finance in a company that specialized in high-tech, high-speed ships.7 He worked his way up to the position of senior executive, earning a Masters in Business Administration from the University of Hull along the way.8 After leaving the shipping industry to start his own animation company, Antony’s directorial debut came in 2005 with China’s first CGI animated feature, Dragon Blade.9 The film was well received, earning an ASDA Award from the Australian Directors’ Guild and a nomination for a Golden Horse Award.10

Antony’s second film, Wushu, was produced by Jackie Chan and starred action heavyweight Sammo Hung. A coming-of-age drama, it supports current research into the social-psychological benefits of martial arts by promoting the sport as a vehicle for teenagers to self-reflect and find inner peace.11 These two films came to the attention of the “Pope of Pop Cinema”, producer Roger Corman, who enlisted Szeto as the director of the feature horror film Palace of the Damned (2013) and the martial arts action film Fist of the Dragon (2014).12

Antony also remains a sought-after fight choreographer and stunt coordinator, having trained some 200 soldiers, horses and elephants to perform the grand battle scenes in Thailand’s highest-grossing firm to date, Naresuan (2007).13

Reflecting on his career, Antony warns that directing is one of the film industry’s “toughest tasks”.14 A young director who is just starting out must be prepared to work with low budgets and quick turnarounds – Fist of the Dragon, for example, was filmed in only five and a half weeks. Nonetheless, Antony and his team “never lose sight of how lucky we are to be doing this wonderful job and to always give our best towards whatever project we take on”.15