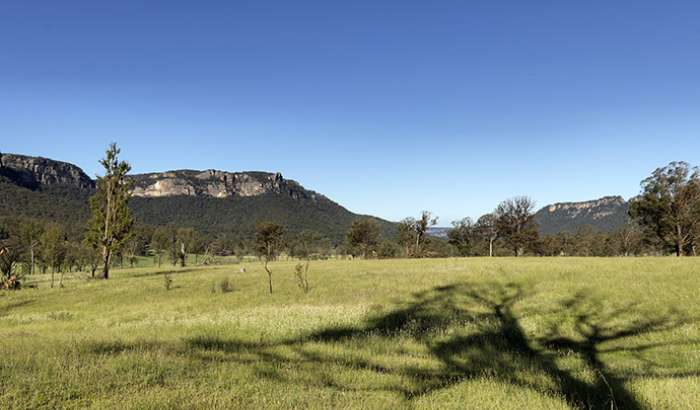 In 2013, Cranbrook purchased almost 90 hectares of land in the Wolgan Valley, located between the Blue Mountains and Wollemi National Parks, with the intention of using it to enhance the outdoor education component of the school's curriculum, particularly Cranbrook in the Field. Construction of Stage 1 of a new campus there was completed in late 2017. The below article, describing the school's plans for the land, appeared in the November 2017 edition of  Schola Nostra.

This is Wiradjuri country, where Indigenous hand painting adorns a wall at the top of the valley, once a meeting place for three Aboriginal nations. Charles Darwin studied Australian native wlldlife here. It's a landscape rich in flora and fauna, country that Cranbrook boys will now play a part in conserving and protecting. "It's a place where you can sense history", Tim Browning, Head of the Senior School, says proudly. When asked to describe it, the superlatives roll: "beautiful, iconic, inspiring, comforting, intimate, rugged". This 88.63-hectare property is Cranbrook's Wolgan Valley campus. Until now, it's existed as a series of fenced paddocks, with a gate and sign. But the site and brief are evolving.

Community, the environment, and synergy of education and location

Wolgan Valley is a residential and experiential education site that will complement the main campus, and allow learning to be undertaken in innovative ways, explains Tim Browning. It aims to build a synergy between education and environment to create a quintessentially Australian educational experience linked to the MYP [Middle Years Programme, a component of the International Baccalaureate] framework. "Wolgan Valley is about taking the School into its next century with a broader educational platform", he says. For Browning, too, Wolgan Valley is about enriching young people's lives by placing them in the natural environment and "connecting them to a sense of awe and wonder ... giving them an appreciation that they're part of an ecosystem, and have a responsib ility to maintain it".

The educational program at Cranbrook must demonstrate to students that communities are critically important and greater than the sum of their individual parts., Browning believes. "It's absolutely vital that we ensure our students are attached to experiences that help teach them this. That's where real personal growth takes place."

The nuts and bolts

The biggest challenge in realising the School's vision for an enriching remote campus, first conceived by Cranbrook teachers back in 2013, was finding the land. It had to be no more than three hours' drive from Sydney, in an area unlikely to be built up in the next 50 years. In the end, the best option was to go over the Blue Mountains, and this former cattle property was the spot.

The masterplan for the site has now been drawn up and by the end of this year there willl be accommodation and amenities to carry educational tours and excursions. Building is already underway. In the meantime, boys taking part in the Cranbrook in the Field program will continue to camp on site as they did for the first time on the first Year 9 trip in Term 3, 2016, and again in Term 1, 2017.

Along with the physical building comes the development of curriculum links. Educationally, stage one is an investigative phase that will see Cranbrook begin to enrich academic programming across a range of subjects in Years 7 to 10, building on the resources of this rich and inspiring location. During this time, Browning wants to develop the school's interdisciplinary units through the MYP framework, with links with art having already been made with the Wolgan campus. Browning hopes that further experimentation with the resources of this campus will inform the best possible educational design for the future.

Additionally, with technology students in Wolgan Valley able to dial into classes at Bellevue Hill and vice versa, he hopes they will be able to attend the Wolgan Valley and Bellevue Hill campuses concurrently. "They may be separated by 150 kilometres, but the use of technology will ensure the classrooms are fully integrated. This is a very important goal", Browning says.

Though at first boys will only undertake short excursions, eventually the school will look at creating longer-term accommodation. The potential to create long-stay accommodation in the future is real and exciting, but would only take place via consultation with our community.

This kind of program would obviously require dialogue with parents, and Browning stresses that there is no plan to set up compulsory residential 10-week or six-month courses. Rather, he wants to see the short-stay use of the campus evolve, with the on-location curriculum and technology being tried and tested in the process.

With this in mind, the last thing Cranbrook wants to do is replicate what other schools have done, simply transferring a group of students from one campus to the other, he says. "This isn't going to produce the vibrant educational program that this school and our children need." Nevertheless, Browning is confident that in ten years, Cranbrook will see every student passing through Wolgan Valley, reaping the benefits of a curriculum informed by place. "If we start in the social sciences, creative arts, and sciences, there is an enormous range of possibilities", he exclaims. "We could have sustainable living and farming taking place at the same time. We could see the development of science units around astronomy, with the possible build of a telescope on campus which is online and available to the community."

Importantly, the campus will allow students to connect with the culture of the Wiradjuri people, upon whose traditional land the Wolgan Valley campus sits. "There's an enormous amount of Indigenous history in the region which we're excited about exploring and understanding", says Browning. He also hopes the boys will be able to help protect important sites, and wants to work with the community to see how Cranbrook's curriculum and activities might be informed. "Taking custodianship of that land, we have a responsibility to communicate its history," he says.

Browning is confident that experiences like these will give Cranbrook students fresh perspectives to help them look beyond the trappings of their city lives. The campus will be an opportunity for them to breathe fresh air. It will challenge their values and connect them in deeper ways to their families, the school and wider Australian communities, Browning believes. It will be an opportunity for them to sit quietly and watch the escarpment turn pink at the end of the day, with only the much-loved Wally, the resident wombat, grazing on the fresh grass by the dam.